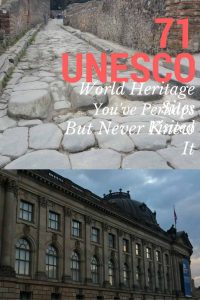 But before I list them, let’s talk about what they are and why its a cool to visit them. A World Heritage Site is one that UNESCO has listed as a place of special significance and this can be for many reasons. At the time of this writing the UNESCO site shows 1,052 different properties all over the world. I know you’ve visited a few of them without knowing it too as many of them are National Parks in the U.S. such as Yellowstone, the Statue of Liberty, the Grand Canyon and places such as Westminster Abbey, Versailles and the Acropolis in Athens to name a few.

You can check out the full list of the UNESCO World Heritage Sites here and in addition, I’ve documented below how you can visit the ones that I’ve visited over the years.

Here are some general tips.

Please leave a comment below and let me know which ones you’ve visited. I’d be very interested to know. Here’s the list of 71 sites I’ve visited and how to get there: