If you are a passrider, then having an Airport Lounge card is really a sound investment. They are like oases in the desert. They are your getaway from the hustle and bustle from the terminals. The amenities can range from drinks and snacks to five course meals. Some lounges have rooms to sleep, places to swim, a place to have a manicure and pedicure, game rooms, children’s rooms, airplane observation areas, gardens, fitness centers, spas, private rooms, conference rooms just to name some of the amenities. It’s no wonder they are so popular.

But which one do you get? Which one has the best deals? Let’s delve into this a little more for you.

Getting into them though can be tricky, unless you have the right credentials and sometimes its a little more difficult with a standby boarding pass. I’ve seen some of the credentials books for these lounges and its pretty amazing at how thick they are. The agents have their hands full at times in deciding who to let in. Access is complex and different for each airport/airline/alliance.

Let’s take a look at the different ways to access these lounges.

As you continue to be loyal with your favorite airline, your elite status will give you access to the lounge. Some airlines like Lufthansa does not offer paid lounge access. Access is only by elite status. Remember that sometimes a paid ticket can be worth it, if you really have to get somewhere.

Here are the eligible elite levels of the three major alliances:

Ensure that you’re familiar with the rules as some of the rules are very odd, like this one from the Star Alliance:

Cabin of Service of Your Ticket

Some airlines offer airport lounge access depending on the ticket you bought. These lounges are either provided by the airline or by the airport. Access is usually based on flying in First or Business Class.

Some airlines like Lufthansa takes this many steps further. In Frankfurt, there is a separate building where you check-in for your flight. Inside that building is your very own Lounge. In Munich, you can have a multi-course meal in the First Class Lounge.

The Virgin Atlantic Clubhouse in London-Heathrow has massage and manicure facilities with an amazing view of the runway and tarmac.

The airlines go all out for the First and Business class passengers.

Just check with your airline to see what access is given to you when you fly space available. It’s usually well documented. 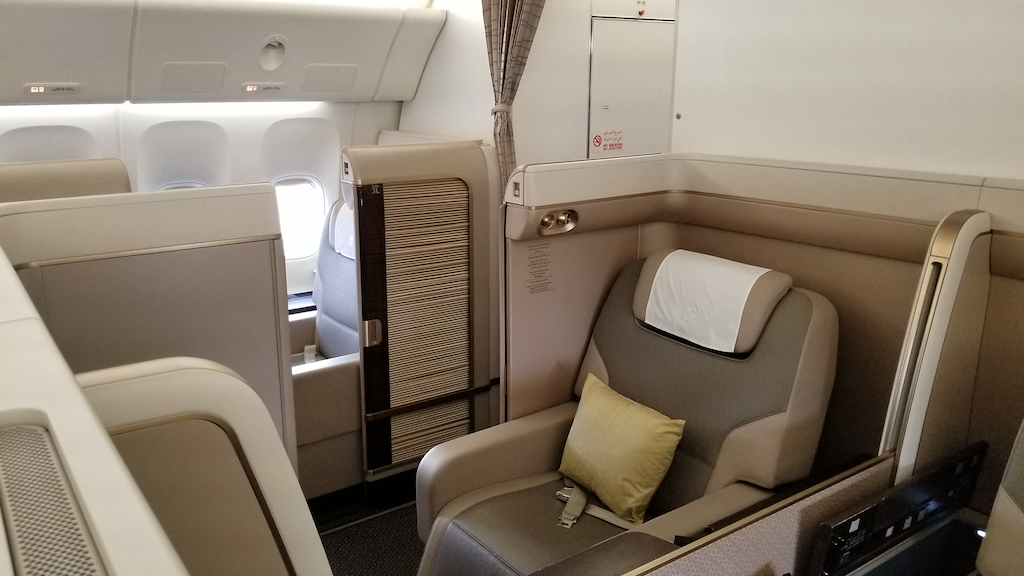 There are several credit cards that offer lounge access as a benefit of having the card. Sometimes these cards are combined with airline status. Let’s take a look at the different cards:

As a benefit of the American Express Platinum card, you can access the Centurion Lounges in several locations around the United States and a few outside. You will need a same day departing boarding pass, your ID and your card to enter. You cannot use a standby boarding pass to enter these lounges. I’m told there’s been people who just list, enter the lounge, use it, then cancel the listing. Don’t kill the messenger. 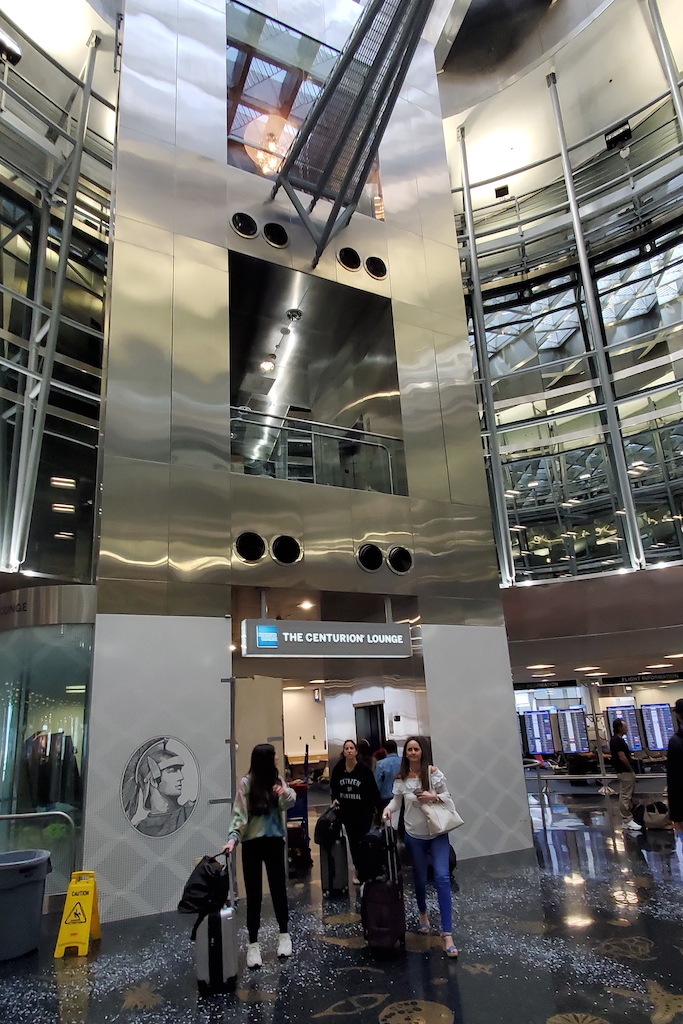 In addition, American Express has relationships with lounges around the world; it’s called American Express Global Lounge Collection. Oftentimes though, your card must be issued from that region of the world. For example, some lounges in the Middle East and parts of Asia will only accept a card that’s issued in that region. Learn more about these worldwide lounges and relationships.

You are also given a Priority Pass card which you can use to access lounges worldwide that accept the Priority Pass card. For the most part you can take 1 to 2 guests and would have to pay for each additional guest.

Of course you can always buy a one day pass using your card.

This credit card offers you a Priority Pass Select membership card. This membership gives you access to thousands of lounges worldwide. Typically you can take 1 to 2 traveling guests into these lounges for the most part. Just check the card details.

You will be issued with a Priority Pass card and you can use the card or the Priority Pass App to gain access to the lounge. Usually, a same day boarding pass is required and access is limited to 3 hour blocks. After 3 hours they usually just swipe your card again.

I explain Priority Pass below. Learn more about the Chase Sapphire Reserve card.

If you have a Diners Club, then you are eligible to use their lounges worldwide.

Learn more about the Diners Club Lounges. They also have a handy App for you to find their lounges.

As a MasterCard holder, you have access to MasterCard branded lounges and lounges with whom they’ve partnered worldwide. LoungeKey to provide its card holders with access to several lounges worldwide. You can find lounge locations from the MasterCard Web site at https://airport.mastercard.com/.

One benefit of being an elite member of the airline alliances is the ability to use their lounges even if you’re not flying in First or Business class. You just have to show your same day departing boarding pass which will have your elite status printed on it. Their systems will recognize the data and grant you access.

If you are an airline employee who has a paid lounge membership (Air Canada or United Airlines) or Star Alliance Gold status you are eligible to use this lounge. Ensure you have your Club card with you.

Some airlines, typically U.S. airlines allow you to purchase an annual membership to use their lounges. You also need to provide a boarding pass for same day travel on that airline or another airline in its Alliance if one exists.

Here is a list of airlines and their lounges that offer paid memberships. Please review the requirements for non-revenue travel:

Airline Partnerships Outside of the Alliance

This is where it gets a little complex at times. Not all airlines belong to the three big alliances, but they may have partnerships that include lounge access. Also, at some airports one airline may hire another just for lounge access as its too expensive for them to establish their own lounge.

Here are some examples:

Some airports offer their own paid lounges that allow you to pay per use. You can usually find out about this information on the airport’s Web site or you can book them using the Lounge Pass Web site.

This company provides a network of lounges worldwide. I’ve used their lounges in London and Singapore and had a great experience. This is a pay on entry lounge, which you can do online or when you arrive, but if you have the Priority Pass card, you can use the lounge. Learn more about the Plaza Premium Lounges.

Priority Pass does not own the airport lounges, they just partner with airport and airline lounges worldwide to provide you access.

Their service allows you to pay one price to access all their partner lounges or you can pay a smaller fee and then pay each time you need to use a lounge.

Some credit cards like American Express Platinum and Chase Sapphire Reserve also gives you a Priority Pass card. You can use the Priority Pass App or the membership card you’re issued to access the lounge. A same day boarding pass is required, but not always requested as you sign in.

This is a better value for international travel as there are not many non-airline affiliated lounges in the United States.

Note that the use of Priority Pass to enter an airline lounge varies by airline. Typically, if it’s peak time for the airline in question, you will not be granted entry. Some airlines will have a posted sign to manage your expectations. This is actually a pain as in some airports only that lounge is available and then you’re denied access and have to slum it in the airport itself.

Plus, United Airlines who runs the United Clubs will not admit you if you are holding a Priority Pass card issued by American Express. This is due to the relationship that United has with Chase who’s Sapphire Reserve card offers the Priority Pass card benefit.

These lounges are usually located in the arrivals halls of the airport outside security. Your flight attendant gives you a pass or you use your boarding pass to gain access.

This is usually used by First and Business Class passengers. The main focus is to have a shower, change your clothes, have breakfast and then head to your meeting or wherever you’re headed. Depending on sophistication, some of these lounges may have a place for a nap.

However, in London-Heathrow Terminal 2, there is a Plaza Premium Lounge that you can just pay to use or use your Priority Pass membership to gain access. It’s actually next to the Lounge used by Star Alliance members on arrival into London. 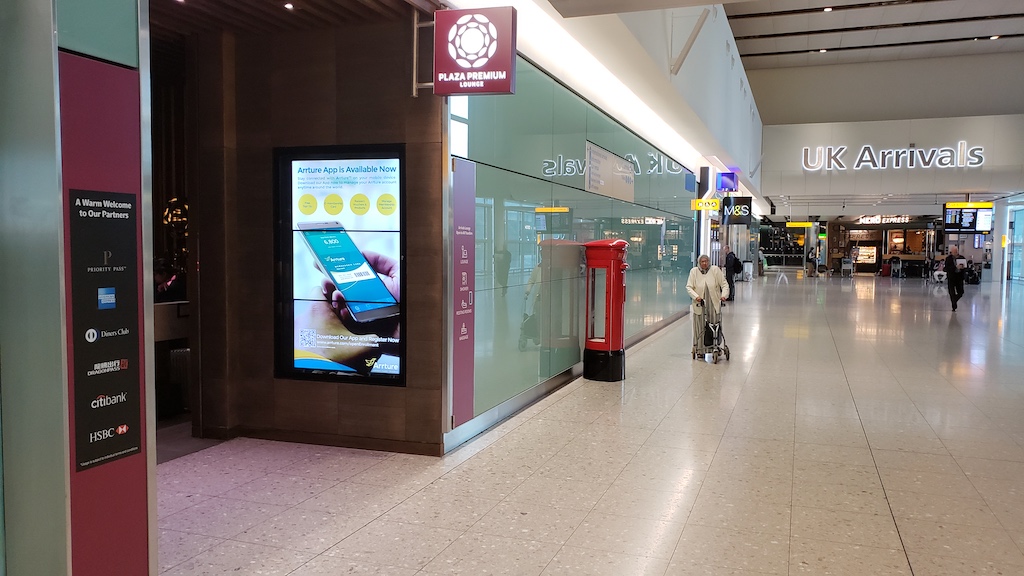 If you have any questions at all about airport lounges and how to access them, feel free to leave a comment here.