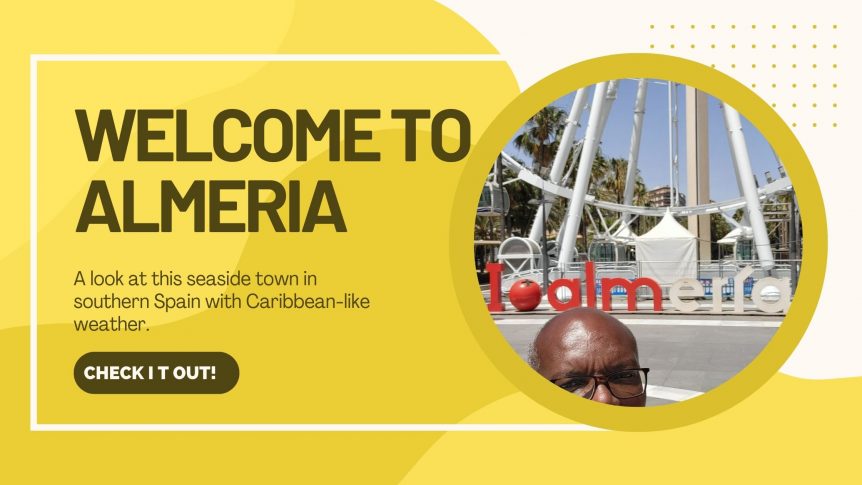 I visited Almería in Spain as a guest of the Andalucia and Almería Tourism Boards in June 2022. I’ve been to southern Spain before, Jerez de la Frontera, Malaga, La Linea and Gibraltar U.K., but not to this particular town, so I was excited to explore.

Why is Almería, Spain famous?

Almería is famous for its beaches and also its national park called Cabo de Gata Natural Park, where some of the beaches can be found. Plus, the Alcabeza Fort.

Almería is located on the southern coast of Spain in the Andalusia region. It is just south of Murcia, and north of Gibraltar, Malaga and Jerez de la Frontera.

How To Get To Almería

There are many ways to get to Almería, Spain.

Air service is provided by the following airlines:

The Visit Andalusia website has a number of bus options at https://www.andalucia.com/travel/bus/almeria.htm.

Ferry service is available from the Spanish territories of Cueta and Melilla in Northern Africa to Almería. You can find more details at https://www.andalucia.com/travel/ferry/home.htm.

Ferries in the port of Almería, Spain

You can take Spanish railway, Renfe to get to/from the area. More details at https://www.andalucia.com/travel/trains/home.htm.

Wear comfortable shoes as you may have to walk to your plane a little distance and don’t take too much stuff in your hands.

Check your schedules on passrider.com.

There are no airport lounges at this airport.

Almería Airport To The City

Take the alsa bus or a taxi into the city.

The local currency is the Euro. Credit cards are not accepted everywhere and when they are accepted, it’s either MasterCard or Visa only. There are ATMs everywhere, but not all will take your bank card.

The native language is Spanish. English is not widely spoken in the region, but you can still get around.

Visa and Health Requirements For Spain

If you are a U.S. citizen, a visa is not required at the time of this writing. However, one may be required for citizens from select other countries. Use this link to check visa requirements for other citizenship.

Here is some additional information from the U.S. State Department, including visa and health requirements.

In addition, check https://www.spth.gob.es/  for the most current travel restrictions and health requirements for Spain before you start your travel plans.

Wifi is complimentary throughout the airport.

Accommodations (Where To Stay In Almería)

There are many places to stay in Almería. You can find a list from the Almería Tourism website at following links:

Also, you can go to https://www.passrider.com/hotelscombined to book your hotel or use the box below.

I stayed at two hotels in Almeria. The Hotel Elba and the AC Marriott Hotel in the center of the city. I enjoyed the location of the AC Marriott hotel and it was also reasonably priced, plus I earned Marriott Bonvoy points.

Where To Eat in Almería

Tapas, tapas and more tapas. Of course that’s not all you can eat as there are plenty of other foods too and complete meals. I ate at two restaurants in Almeria which had great service and good food as well. Plus one other in San Jose, a nearby town, called 4 Nudos.

Amalia, place to have late night coffee in Almería, Spain

Things To Do In Almería

So what does one do in Almería?

The main attraction is its beaches and the Cabo de Gata Natural Park. The city has a rich history which is partly due to its proximity to the northern African continent. Let’s take a look at what it has to offer:

Do you like to hike? Do you like bike riding? Do you like the beach? Then this area is just for you. We actually toured the area with 4×4 jeeps from Rolling Almería. This is a really great way to do it as they know the area and area actually quite friendly too.

You can find more information at https://www.andalucia.com/environment/protect/cabodegata.htm.

The beaches of Cabo de Gata-Níjar

The Tabernas Desert is located just outside of Almería. When you think of deserts, Europe does not come to mind at all. The Tabernas is the only desert in all of Europe. You can go dune buggy driving like we did with Desert Buggy. A few movies have been filmed in the desert as well and you can visit remnants of the movie sets too.

You can find more details at https://www.andalucia.org/en/natural-spaces-desierto-de-tabernas. 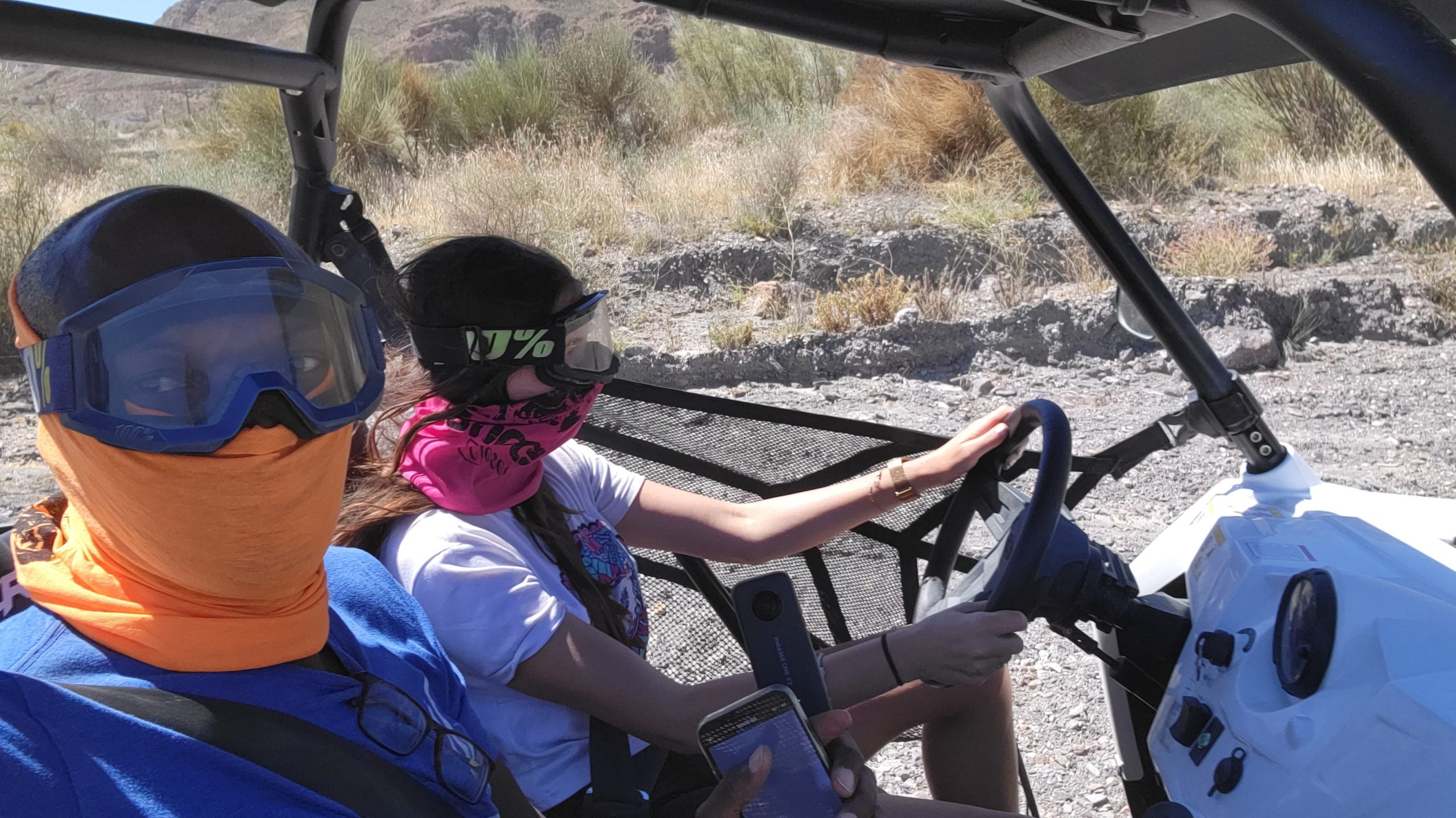 This is an area that is setup like the Wild West for filming Western (cowboy) movies. I’m a big fan of these types of movies and grew up with them, so this made the visit very special.

Spain actually had a number of movies that were filmed on these sets, such as the Good The Bad and The Ugly with Clint Eastwood. I love this movie so it was really neat to walk the set. I found this on the Visit Andalucia Website:

In the 1960s and 1970s more than 100 films were partially shot at these two film sets in the bleak Almería desert landscape of Tabernas, including Westerns such as A Fistful of Dollars, The Magnificent Seven, and The Good, the Bad and the Ugly; also Lawrence of Arabia and Indiana Jones and the Last Crusade. An episode of Dr Who (A Town Called Mercy starring Matt Green; Series 7, episode 3) was shot here .

For some reason though, this place has a confederate flag, not sure why.

You can find more details at https://www.andalucia.com/entertainment/themeparks/minihollywood.htm.

The entrance to the Zoo here

Mini Hollywood from above

Visit the town of San José

San Jose is a small town about 45 minutes out of Almería. I add it in here as it is worth the time and effort to head out here. It has beautiful beaches and is a seaside town with great restaurants and is very picturesque.

One the beaches at San Jose

The town of San Jose

You can find more information about San Jose at https://www.andalucia.com/province/almeria/sanjose/home.htm.

The Town of Almería Itself

We had a local Guide who walked us through the town and I also did my own walk as it’s an easy walking town. It was quite hot, so I advise bringing lots of water, wearing a comfortable shoes and dress appropriately.

The main attraction is the Alcazaba de Almería; this is a fort overlooking the port of Almería. The views are wonderful from here as well as the history, so I highly recommend it.

You can find more information about the Alcazaba Fort at https://www.turismodealmeria.org/en/rutas/the-alcazaba-fortress/.

Our Guides at the Alcazaba Fort

Views from the Fort

Walking along the coastline in the city of Almería, Spain

There’s even a statue of john Lennon located just outside the AC Hotel Marriott in the city center.

Please leave a comment below about your own experiences and tips.