I just did a recent trip to Athens, Greece (ATH) as a guest of the local Tourist Board. It’s been a few years since I’ve been so I was eager to visit again. Last time I was there, they still had the old airport! I had flown in to see a former colleague who worked with me as an Intern at the time. We went to a nearby bar that overlooked the airport and drank beers while we watched planes land. Then we went to his house, had dinner, came back home late and I was up at 4:00a as I had a 6:00a flight to Rome, Italy (FCO) on Olympic Airways’ (OA) Airbus A340 in the smoking section :-).

This trip was nothing like that! I actually went into the heart of the city and mingled with more locals and I loved it! Here are some things you should know about Athens.

As you can see from the airlines service,  you can get to Athens from almost every major European and Middle East hub cities. If your airline does not serve the city directly, check if they serve any of the neighboring islands and then you can take a ferry over to Athens. If that won’t work, use your airline to the European hub city and then do a ZED or even a discount fare ticket to Athens.

The city of Athens, offers a program called This is My Athens. I can’t recommend this program enough. Basically, they pair you with an Athenian who shows you around the city. It’s as if your best friend came into town to visit you and you showed them around. You can arrange beforehand or you can just let it flow once you are paired. In my case, I was paired with someone and he asked me what I wanted to see/do, I said it does not matter and off we went. I had such a blast. It’s like seeing the city through a different pair of eyes. You must apply online before you, but just do it and enjoy. Oh, did I mention that its FREE and no tipping is allowed. Would you accept a tip from your friend if they came into town and you showed them around? Alright then.

Where Do I Stay? 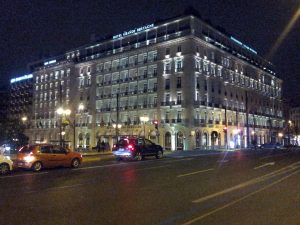 Athens has accommodations of all stature. I stayed in about three different types; a hostel, a mid priced hotel, the Metropolitan Hotel and a three-star which is really a two-start property only two blocks away from the center of the city. So there are accommodations for every budget. There are even a few 5-star properties such as the Intercontinental and the Grand Bretagne, a Starwood property for those of you who are luxury minded.

Don’t forget to start your search by using my relationship with Hotels.com.

Athens, is a walking city and has a lot to offer, don’t dig anywhere as you may be disrupting years and years of history. There are even museums in the subway stations. When they were digging to create the stations, they unearthed ruins, so instead of moving some of them, they just created museums around them in the stations; its a beautiful thing to see. So stop and see them as you transit the subways. 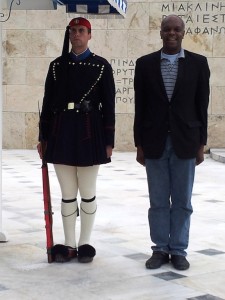 From the changing of the Guards at Syntagma Square (which happens on the hour every hour and is a must see) to the remains of Zeus’ Temple a short walk away to gazing at the Parthenon on the Acropolis to walking in the narrow streets of Anafiotika, Athens is not short of things to do. Not to mention having a coffee, as the Europeans say, or having a meal in a traditional Taverna in the Plaka Area of the city which is located at the eastern base of the Acropolis or at a smaller cafe called the KafeNeio where you can have a coffee as well as some small bites with some wine as well.

I was told by my guide that the word “acropolis” means highest point, but he pointed out that that the Acropolis is not really the highest point in the city as you can see once you get up there. The marble used to build the Parthenon actually came from one of the hills not too far from the Acropolis. I’m still amazed as to how they got it there since they did not have all the modern ways of building as we do today. If you look closely at the columns, you can see that they were build in blocks. Plus the artwork was actually done on site. Its just simply incredible. 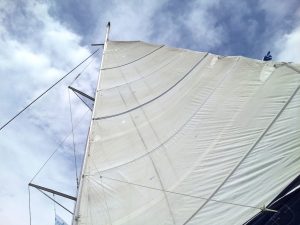 I did not visit any of the islands on this trip, but plan on doing so on my next trip. So watch out for a future post on that. I did however take a catamaran trip from the south of the city and made a loop ending back right where we started. Although it was a tad chilly, it was a sweet ride and my first time on a cat. You can actually rent these things and sail to the islands I’m told.

Lycabettus Hill is also on my list for the next visit; you can see it from the Parthenon.  I’m also told that its quite a hike to get to the top of the hill. And cabs will only take you almost to the top. So you are up for a hike go for it. Otherwise, just take the underground funicular which does take you to the top :-). The view is worth it from the photos I’ve seen. You can see what I mean as captured by my friend Laurence below. There is also the Penteli mountain from which the marble that built the temples on the Acropolis were taken; not sure if you can still make it over there though.

I could go on and on about my visit to Athens, so if you have any particular questions, please feel free to let me know by leaving a comment below. I will endeavor to get an answer for you pronto. Also, if you’ve been to Athens and have anything to add, please leave a comment below as well. 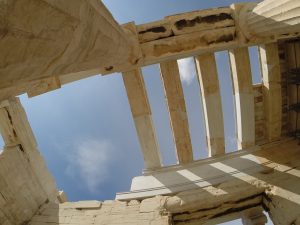 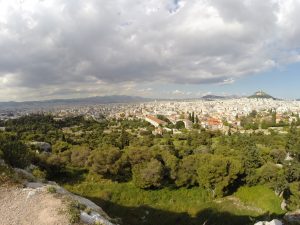 There is a hill that is to the left of the Acropolis if you are standing with your back to it. Tasos, my local Guide through the “This is My Athens” program took me up there as this is his favorite place. I can certainly see why as you can see all of Athens from there. This photo only shares a small portion of the city below us.