In November 2014, I took a trip to Sri Lanka compliments of SriLankan Airlines and The Cinnamon Hotel Group both companies based in Sri Lanka. It was my first time to my longing destination of Sri Lanka. After seeing sights from an Amazing Race episode, I really wanted to go and ride the trains. Our trip consisted of a very large group arriving at separate times. We all had the opportunity to experience what Sri Lanka had to offer as well as a few of the many properties of Cinnamon Hotels. This post will give you an insight into these fantastic properties and what they have to offer. 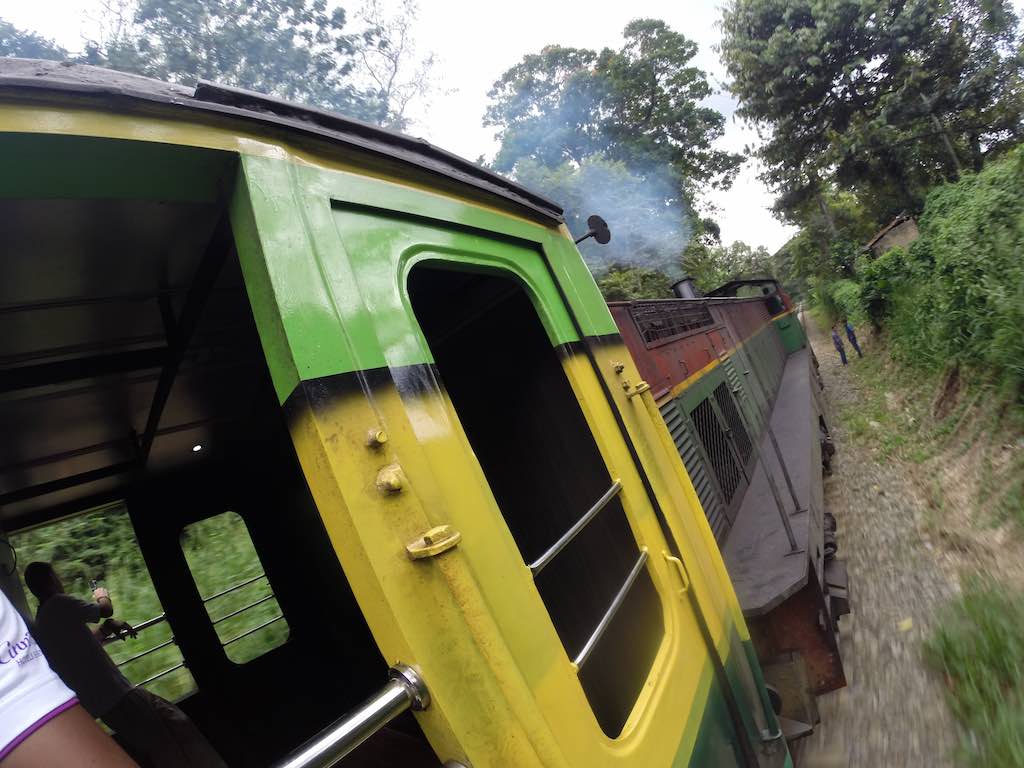 I’m going to start with my favorite of them all; Cinnamon Citadel in Kandy. This one is in the mountains and is located along the longest river in Sri Lanka, the Mahaweli. The day I checked in, I spent about half an hour on the balcony just enjoying the view of the river and the sounds all around me. Clearly the best part of my visit, well one of the best parts of my visit. 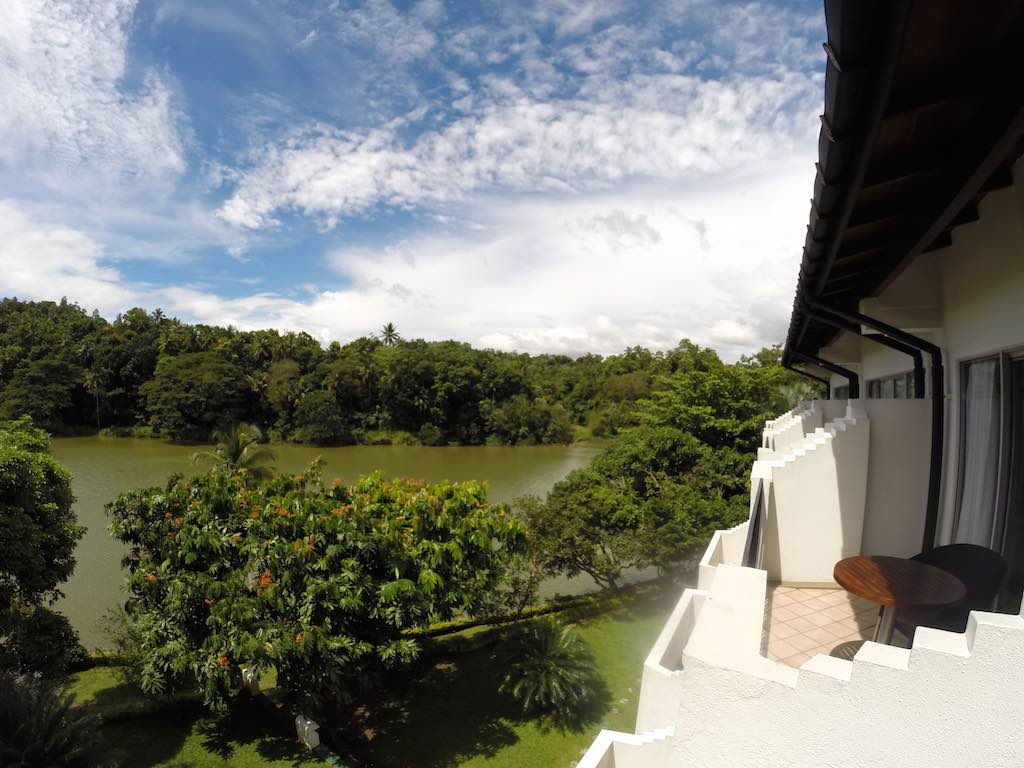 The hotel does have some cool activities as well such as visiting a local Brass Worker, boating on the Mahaweli River and having lunch and dinner in unique places. One of those being atop the hotel and another being in the woods near the river. You can find out more about these experiences by contacting the hotel’s Concierge while visiting or arrange something before your trip. 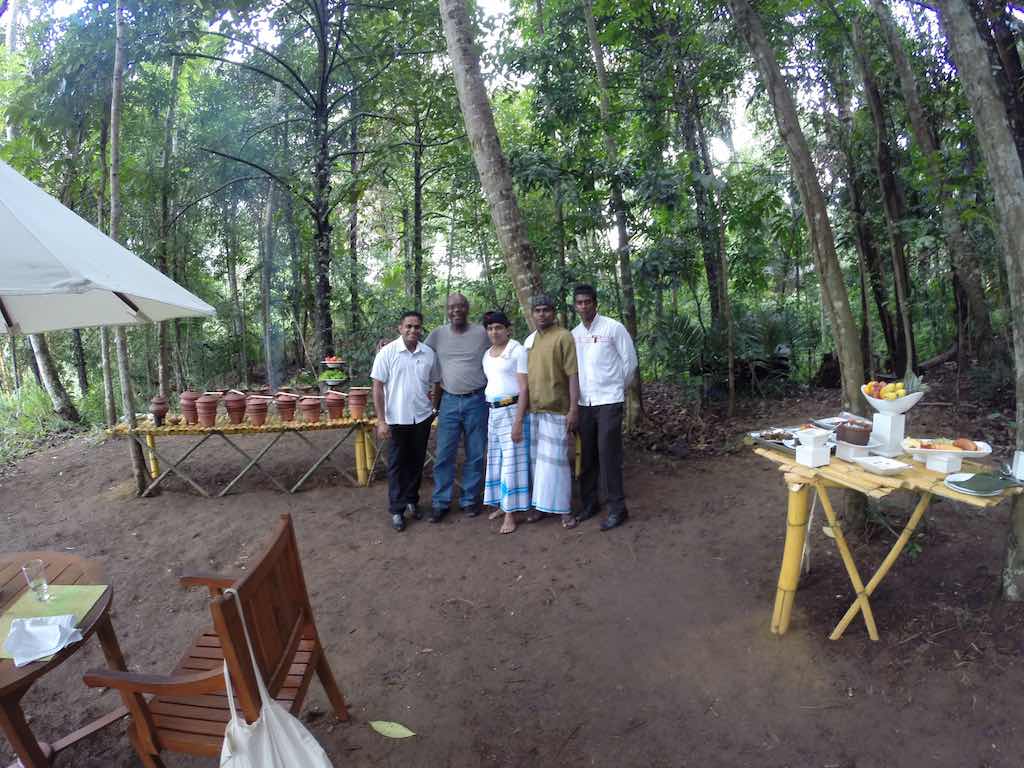 Cinnamon Hotels – Lunch in The Woods

There are also three restaurants, the Cafe C, Panorama and the main bar area. Cafe C sits right close to the river so you can have a view of the river as you dine.

The rooms are very well done and most have a view of the river. They are based on a terraced design, which adds to the property’s look and feel when viewed from afar. 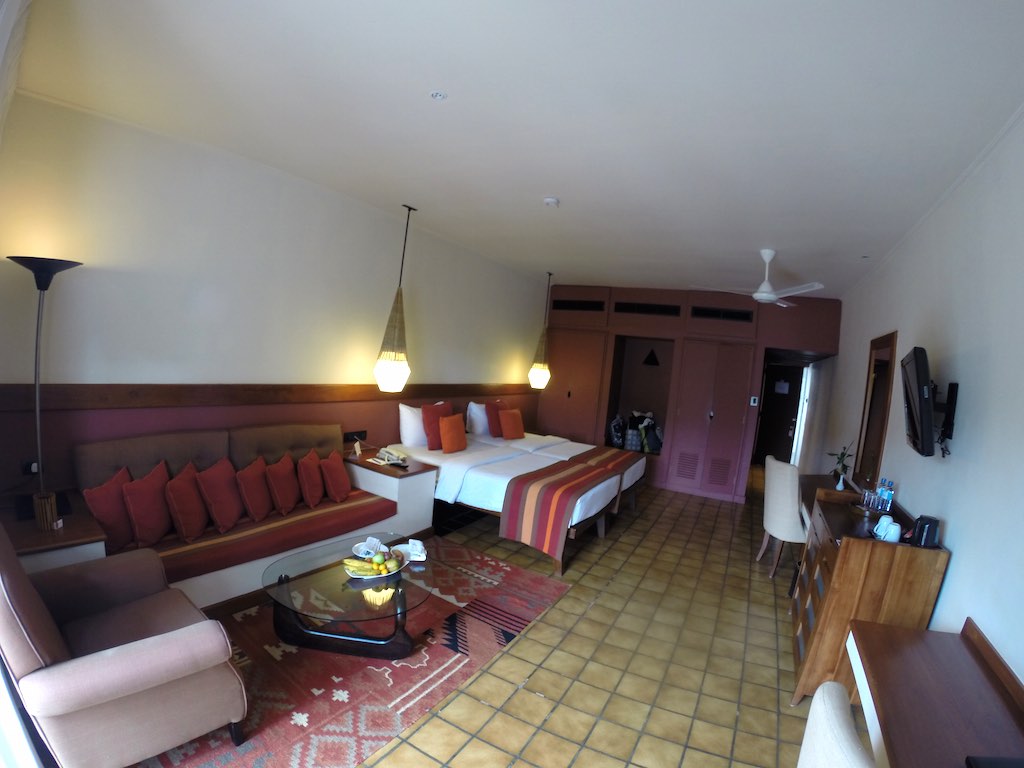 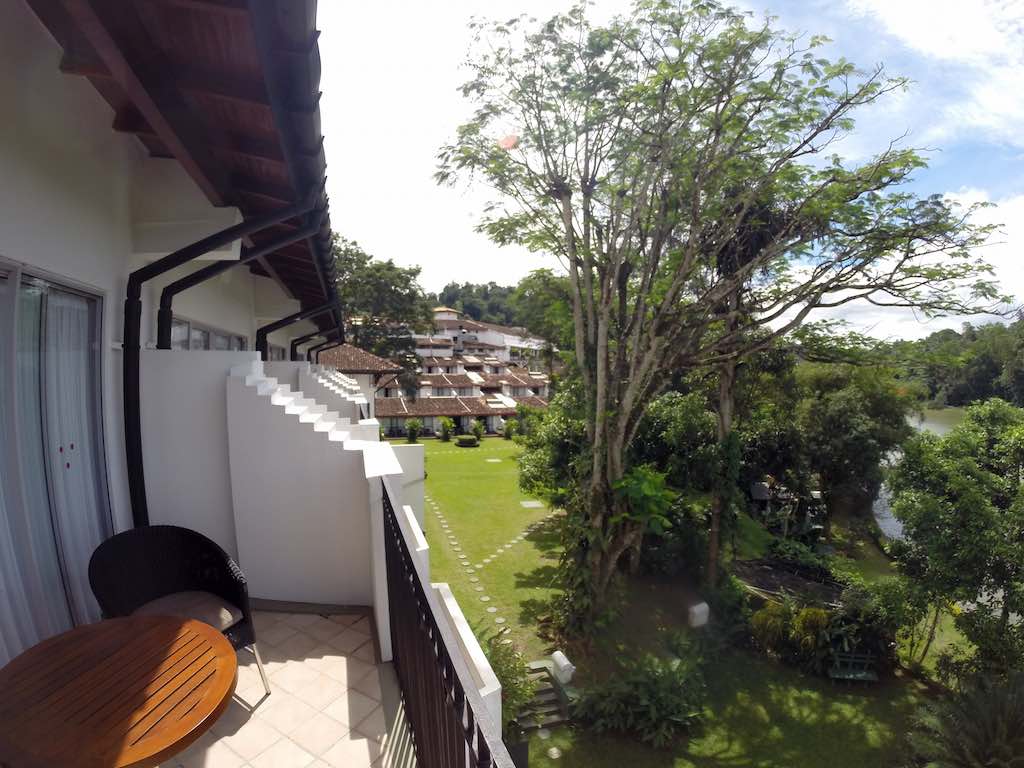 This hotel is my first impression of any hotel in Colombo; It’s where we spent the very first night in Sri Lanka. I had a double room that housed two beds and had a view of the street at the front of the hotel so that worked well for me. Although other rooms in the property has a pool and/or a lake view that would have worked much better :-). 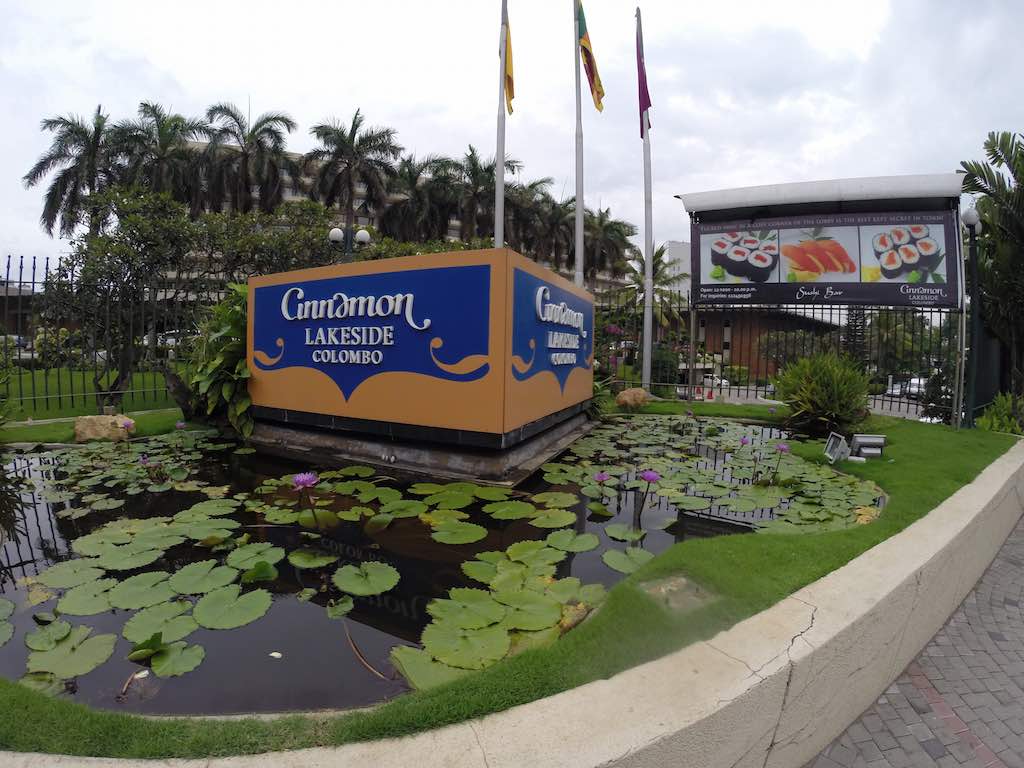 We had to wait until the afternoon to check-in as we arrived very early in the morning. This may be the case for you if you arrive from Europe or Asia as this is the time all the flights arrive. They do allow you to stash your bags, but you are on your own until regular check-in time which is usually 2p onwards. They would have let us check-in but they were full the night before so they had no clean room available.

I suggest checking out the city of Colombo in the interim as the property is located in the heart of the city. You can either walk everywhere or if you are feeling lazy, just take a Tuk Tuk. Ensure that you negotiate the price before you enter though. You should pay about 100 Rupees for a short ride. 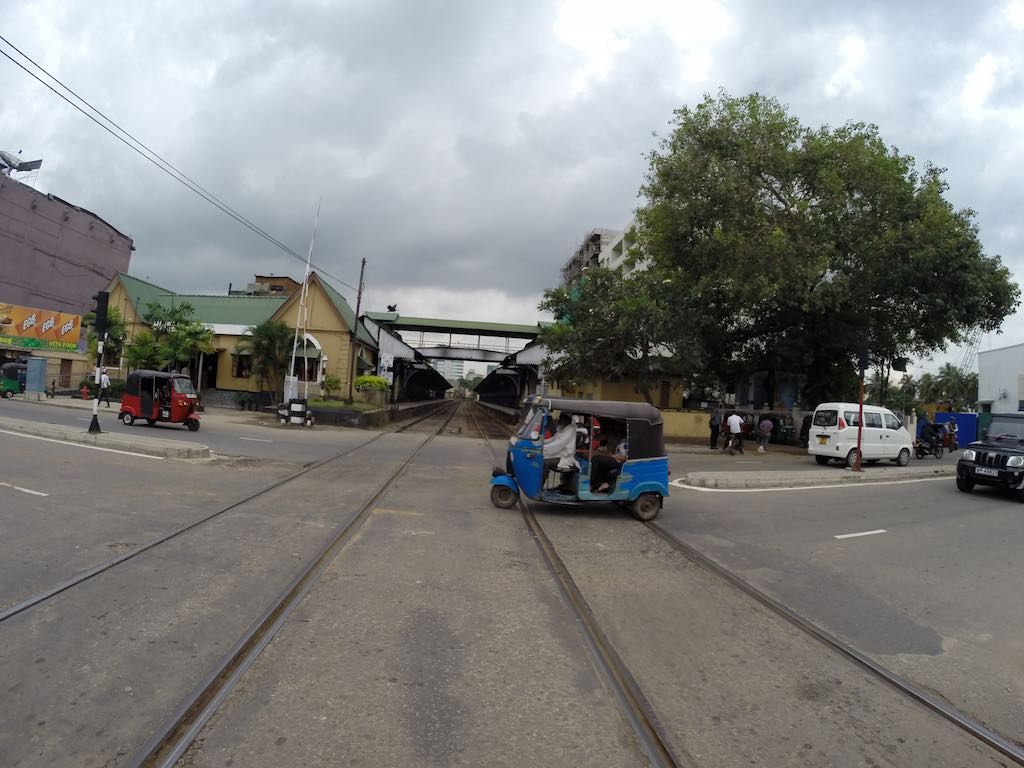 Most of the hotels in Sri Lanka have a buffet restaurant. You can pay to have the meals included in your rate or not. If the deal is a good one, I think you should do it, at least for one night just for the experience as the food is really delicious and plentiful. If you arrive early and ask nicely maybe they’ll allow you to have breakfast, if not though, there are several places nearby to have some food, so there’s no shortage at all. I encourage you to try the local food at the local hangouts; PS: you will eat with your hands at select places.

There are nine places to eat at this facility including a place called 7 degrees North. Get it? :-). It’s the latitude of Colombo. 7 degrees North is just north of Colombo hence the reason why its so hot. Of all the restaurants/bars though, the place I like the most about this property is The Library, its actually a bar and a library. It is actually a local Club, with a membership and it does plays music complete with a DJ on select nights. It’s just a great place to have a drink and get away from the hustle and the bustle of the hotel.

You can also have sushi, Thai and Chinese food to round it all out. Of course Sri Lankan food is served at the buffet which is in the main dining room.

Of course like most hotels in Colombo, there is a conference center and they do local weddings. There was actually a couple getting married while we were there.

This property is located about a three-hour drive from Colombo and is ideal for visiting three of Sri Lanka’s well known sights; Sigiriya (the Rock), Polonnaruwa and Kaudulla National Park where you can go to see the elephants during the gathering (it’s a sight you have to see for yourself if you like elephants). I have a story coming up on it all. On your way there you also past the Golden Buddah at Dumbulla. So its strategically located. 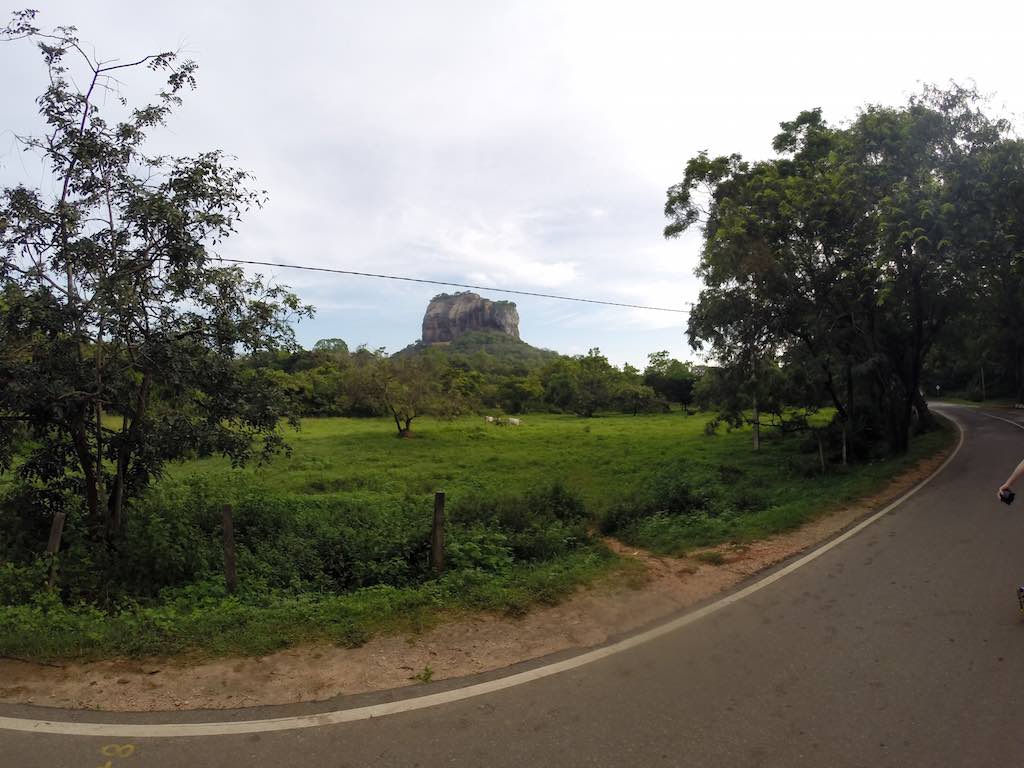 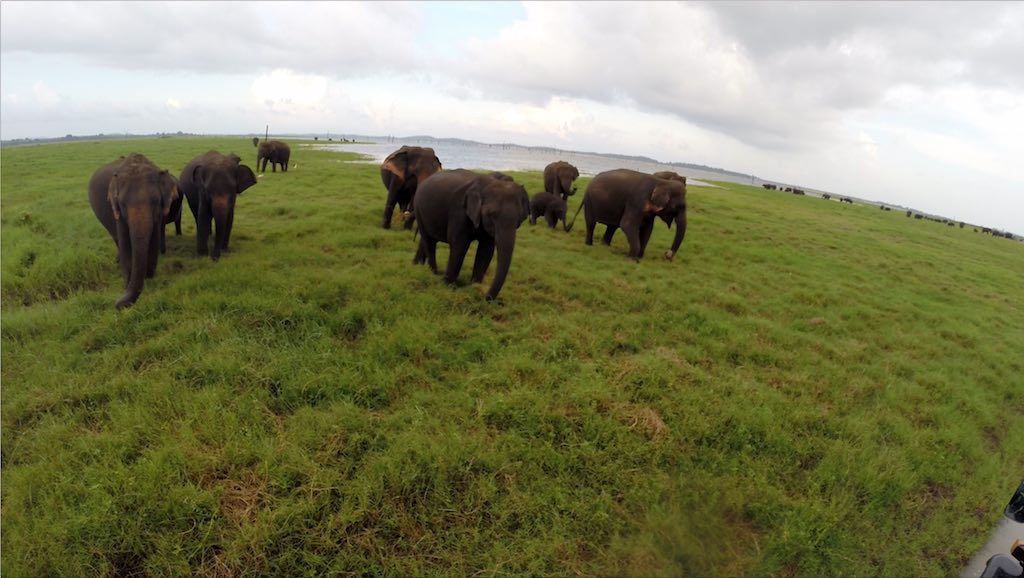 The property sits on the Habarana Lake, although due to my short stay I did not get a chance to enjoy it nor the pool. The rooms are actually cabins and are a bit rugged, but that’s a part of the charm of the place. Across the way is the Cinnamon Lodge Habarana which is a more upscale property. I only had dinner there and did not get a chance to check out the property during the day time, but just walking through at night I could tell its a cut above the Chaya Village. The Chaya Village will soon be rebranded as Cinnamon Chaya Village. 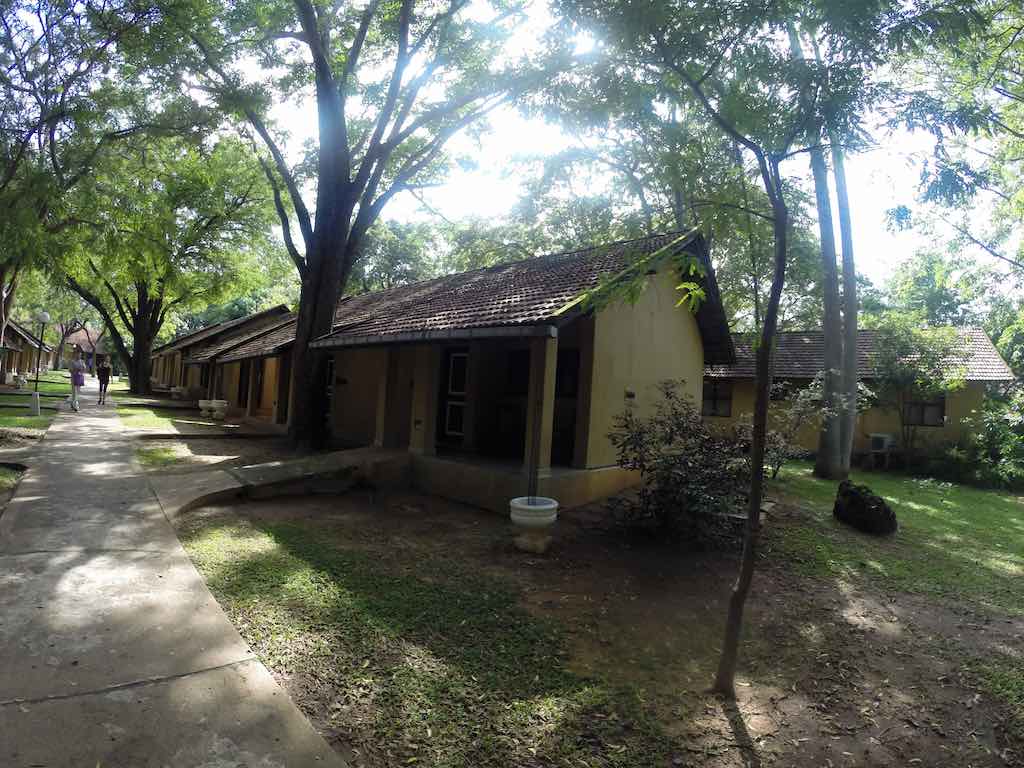 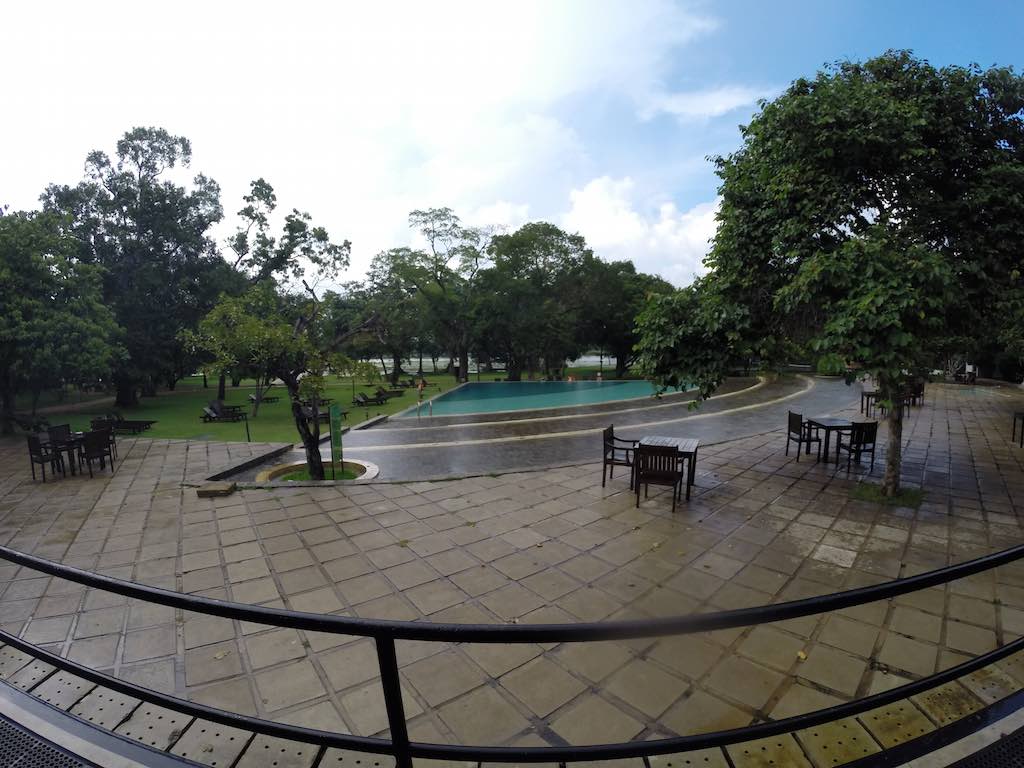 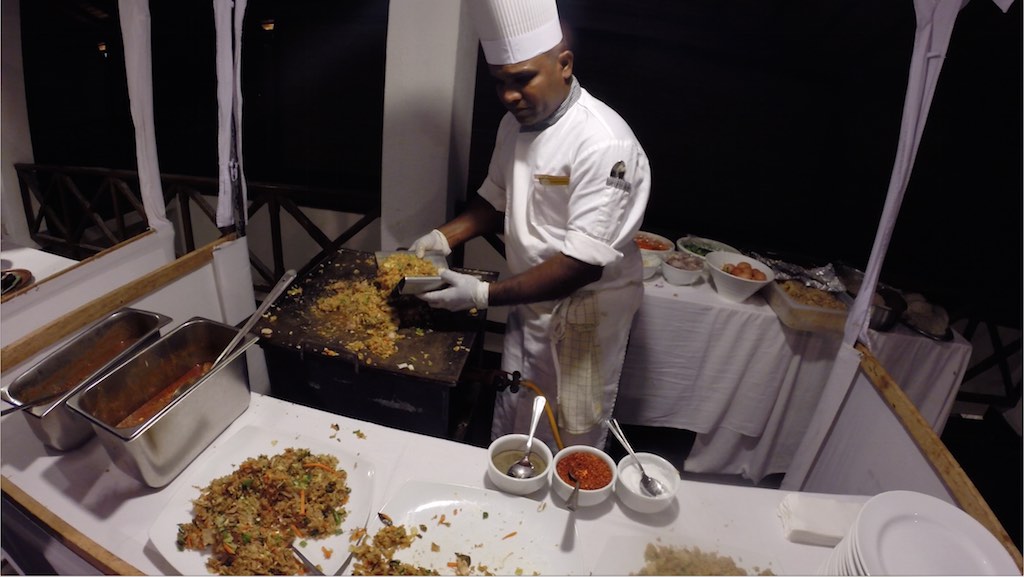 The hotel is located in the small town of Habarana which is a great walking town. Feel free to walk out of the property, make a left and walk into the town and check it out.

I arrived here late at night after doing some sightseeing arranged by the Cinnamon Hotel folks and cVisit Sri Lanka. I stepped into the room, walked across to the balcony doors and stepped outside. I could hear the roar of the ocean, but couldn’t see anything in the pitch darkness. The next morning I was pleasantly surprised by a beautiful view of the ocean. Ah, bliss. Some of my friends also mentioned that they had a hot tub on their balcony, really? 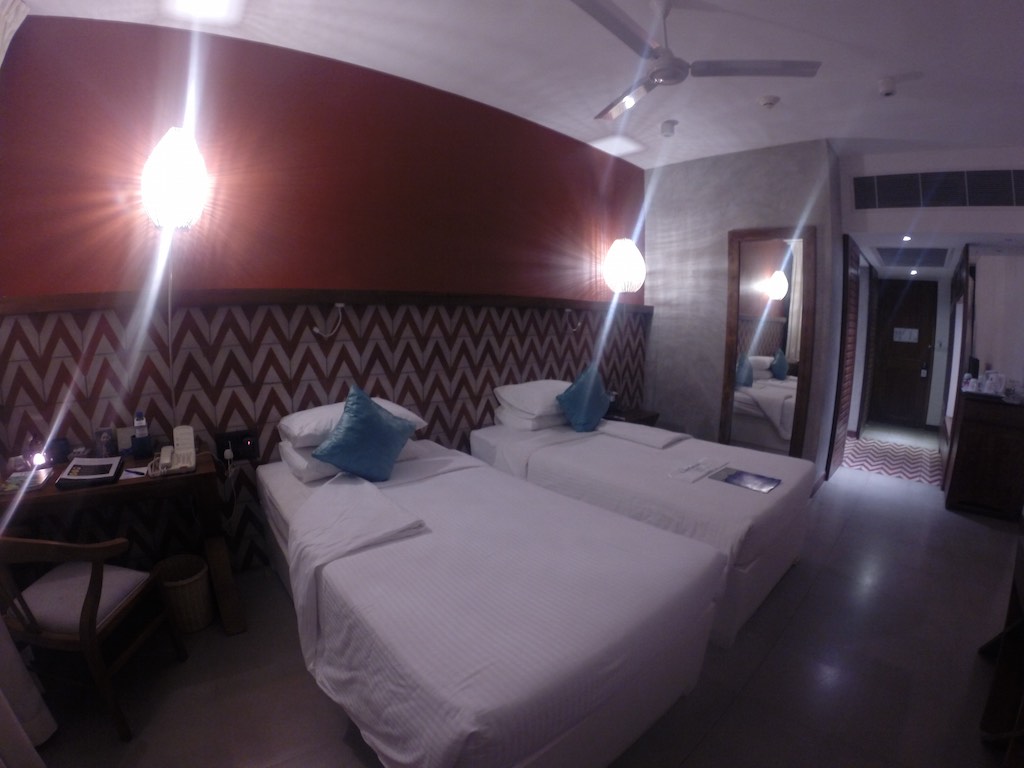 As if this was not enough, there is also a fantastic pool with another view of the ocean. These are located right next to the breakfast and dinner buffet area. This was the hotel where we did karaoke as they have a special room setup for it. So you can impress your friends and/or other guests when you visit.

This property is located about an hour and a half south of Colombo on the A2. You can actually fly into Bentota on CinnamonAir and then just grab a cab to the property. 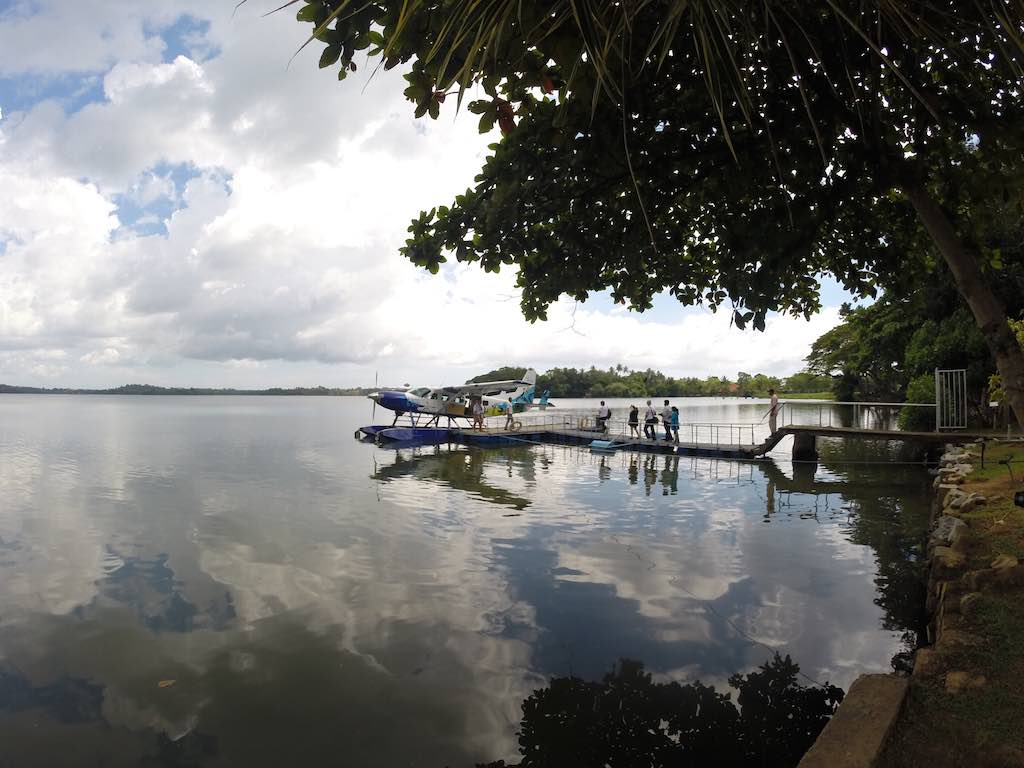 The Cinnamon properties are great places to stay as you visit Sri Lanka. As you can see they are located in different parts of the country and have varied facilities. During my stay I had no issues, the staff was cordial, we had more than we could eat everyday and the properties were immaculately run.

Have you been to Sri Lanka and stayed at any of these properties? What’s your experience been like?
Note: Accommodation at all these properties were provided complimentary by Cinnamon Hotels. Ground transportation was arranged by cVisit Sri Lanka. As usual, the views are my own.
FacebookTweetPin