Property Name: Jetwing Blue Negombo Sri Lanka
Property Address: Ethukale, Negombo Sri Lanka
Nearest Subway stations: None
Nearest Train station: There is a railway station in Negombo, its actually the stop before Katunayake. This lines goes north to Colombo the capital of Sri Lanka.
Nearest Airport: Bandaranaike International Airport, Katunayake Sri Lanka (CMB)
Instagram: https://www.instagram.com/jetwinghotels/
Facebook: https://www.facebook.com/jetwinghotels/
Twitter: https://twitter.com/jetwinghotels/
Novelty Factor: You can take a tuk tuk to the airport, but I opted for a cab, Kangaroo Cabs as it was an early departure and I wanted no issues.

I was in Sri Lanka in late 2014. You can see some of the stories at https://www.passrider.com/?s=sri+lanka.  I needed a place to stay at the airport after returning from Male, Maldives. But as the city of Colombo, Sri Lanka is a distance from the airport I chose to stay in Negombo, the next town over at the Jetwing Blue Negombo. Although this was a complimentary stay, the views are my own as usual. It’s worth staying here to kind of de compress from Colombo before you depart Sri Lanka.

I came straight from the airport via a cab to the hotel. I was pretty tired after enjoying Male and jumping on my Korean Air Airbus A330 flight to Colombo.

The hotel is located in the middle of a fishing community on the beach and the cab just pulled into the front of the property. I was greeted with clasped hands and a bow and “Ayubowan,” the traditional greeting that means Welcome. The young man offered to take my backpack, but I politely offered to keep it as I only had that and a smaller backpack so I was able to carry it all.

I then walked into the dimply lit but spacious lobby for check in. 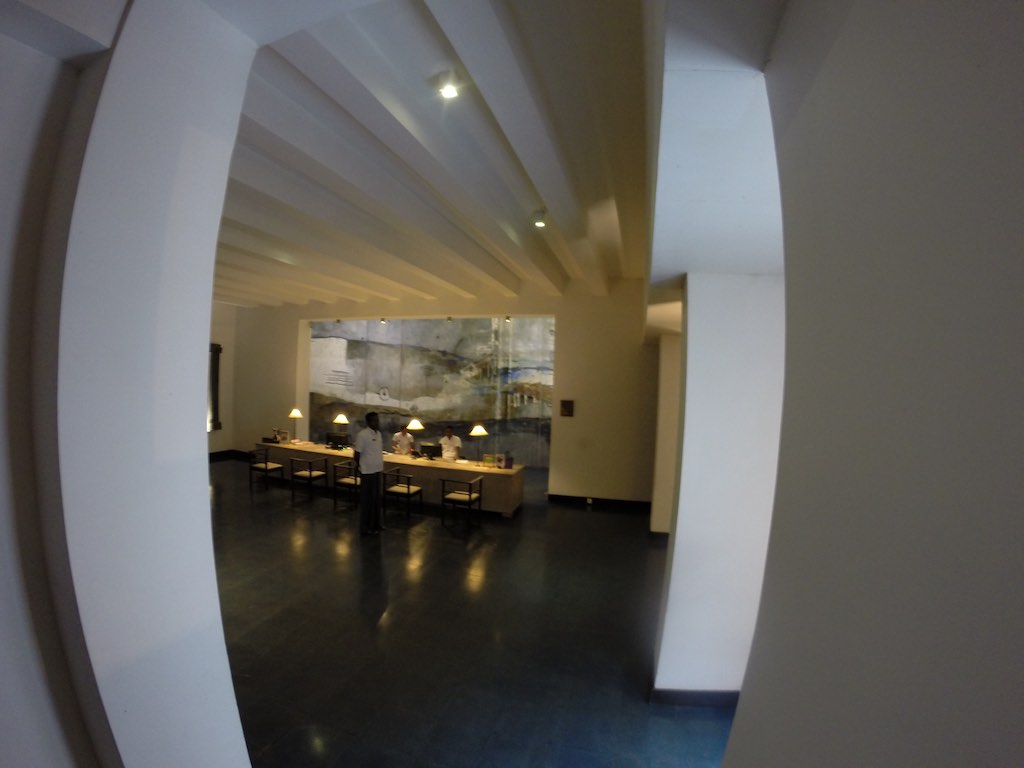 Once I returned much later that day, I just picked up the keys from the front desk and sure enough when I made it to my room, my bags were neatly placed in the corner of the room. Yeah!

The property sits directly on the main road and stretches all the way to the beach. They do have a pool and the rooms are in the main building above the lobby and restaurants and bar. It’s quite a very large beach front property and there is also a pool. 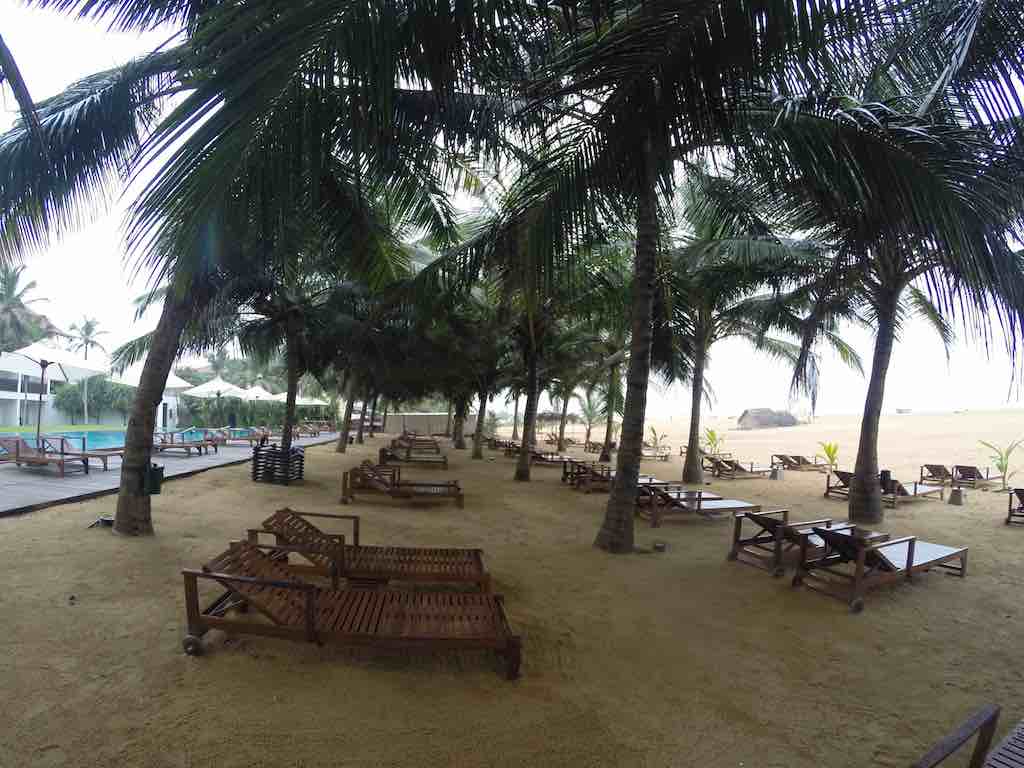 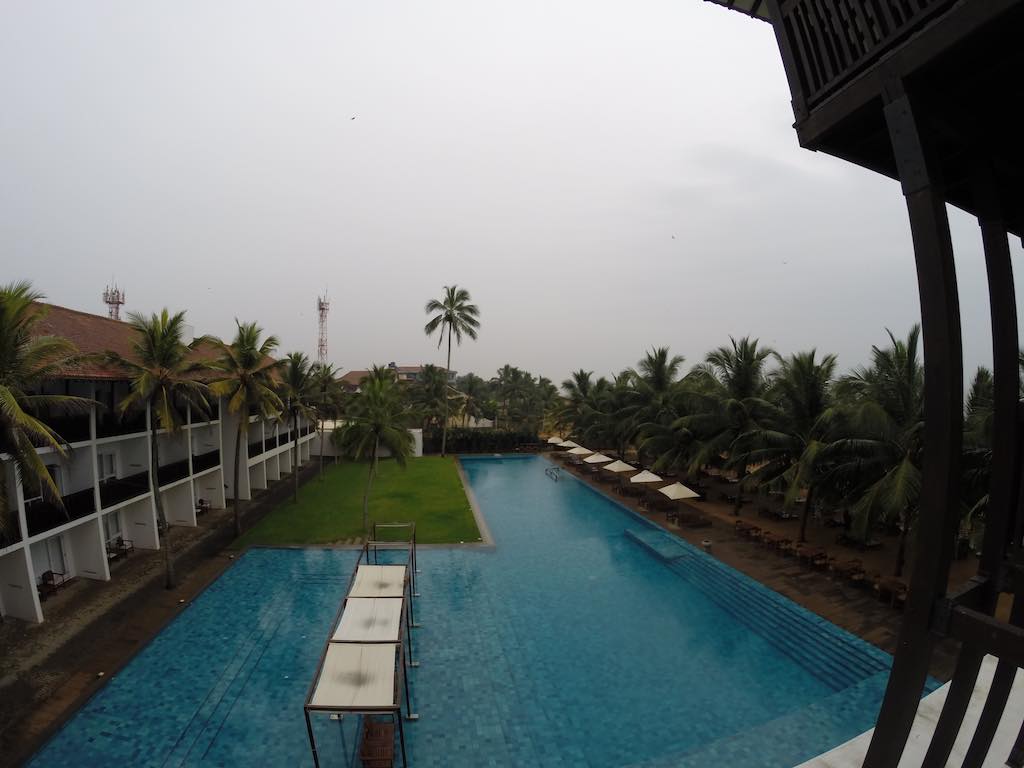 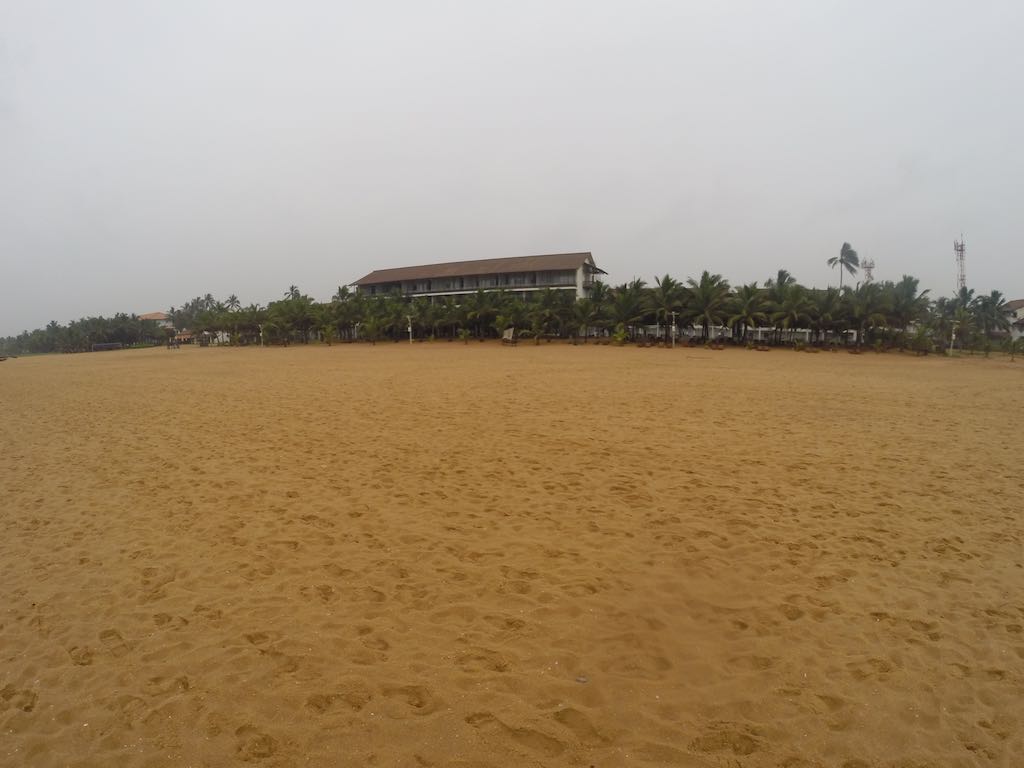 Jetwing Blue Negombo, Sri Lanka – The view from the beach 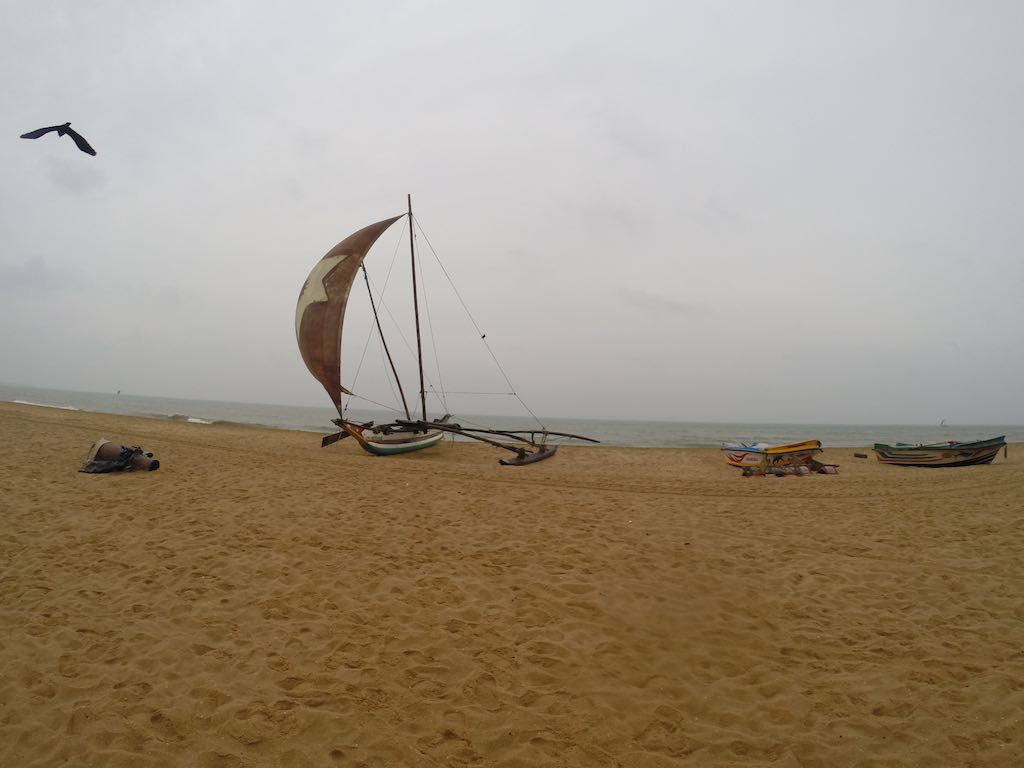 The room I had was a very large room. Too large really :-). And very nicely done. As the hotel is eco-friendly many things were wooden.

There was a glassed area around the bathtub so you can actually see out into the bedroom/living room. There is a curtain for privacy. I also had a balcony that overlooked the ocean. One of the things I loved was listening to the ocean.

I wanted to sleep out there, but I hate bugs, so I refrained. It was so nice and cool out there. 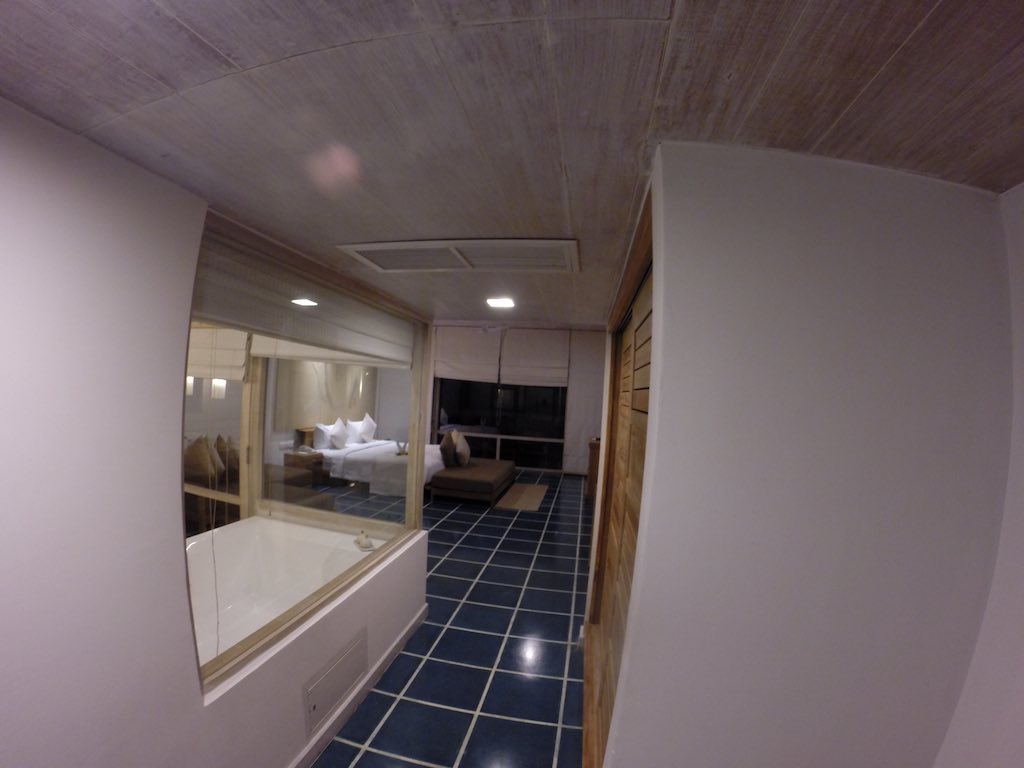 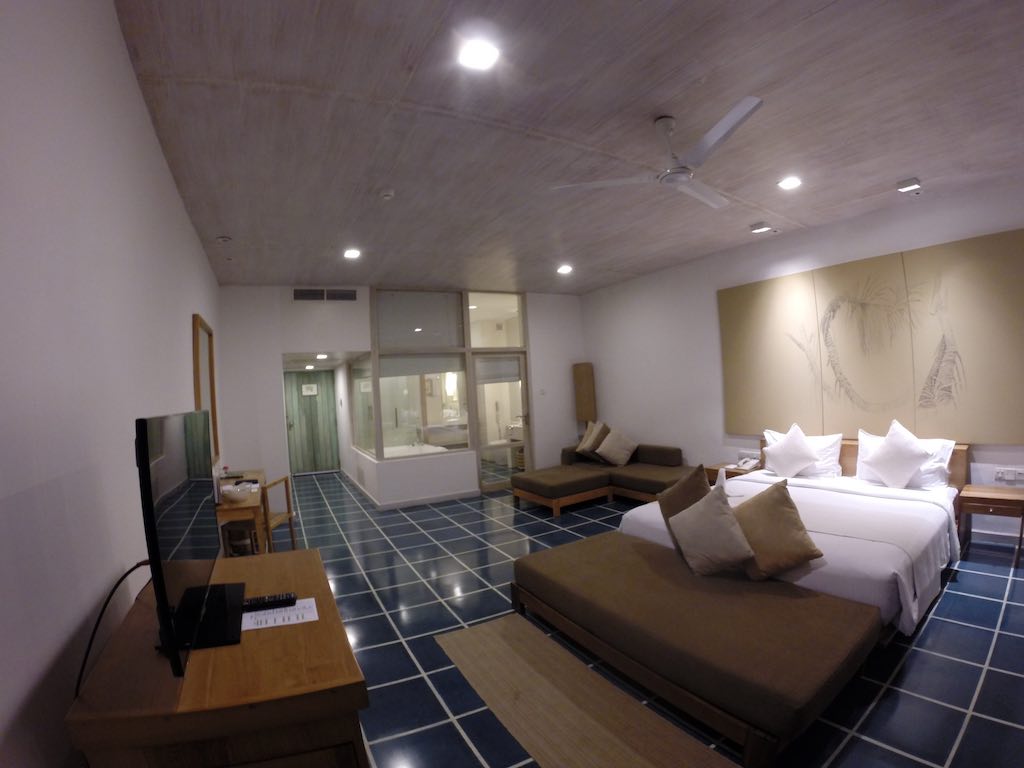 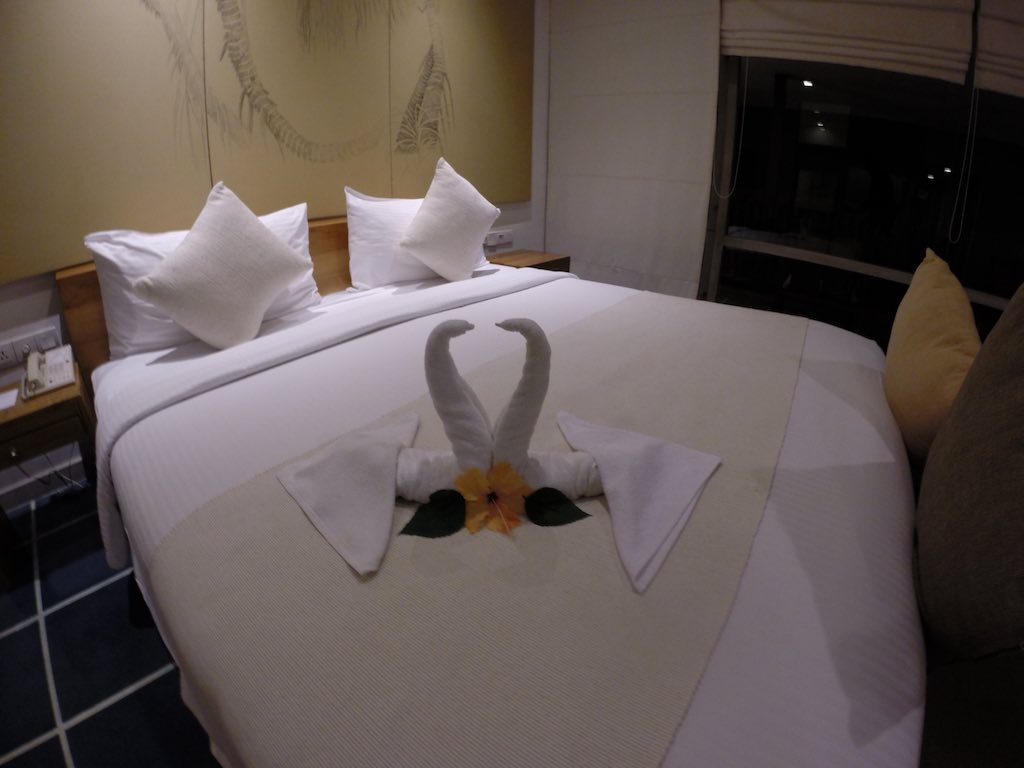 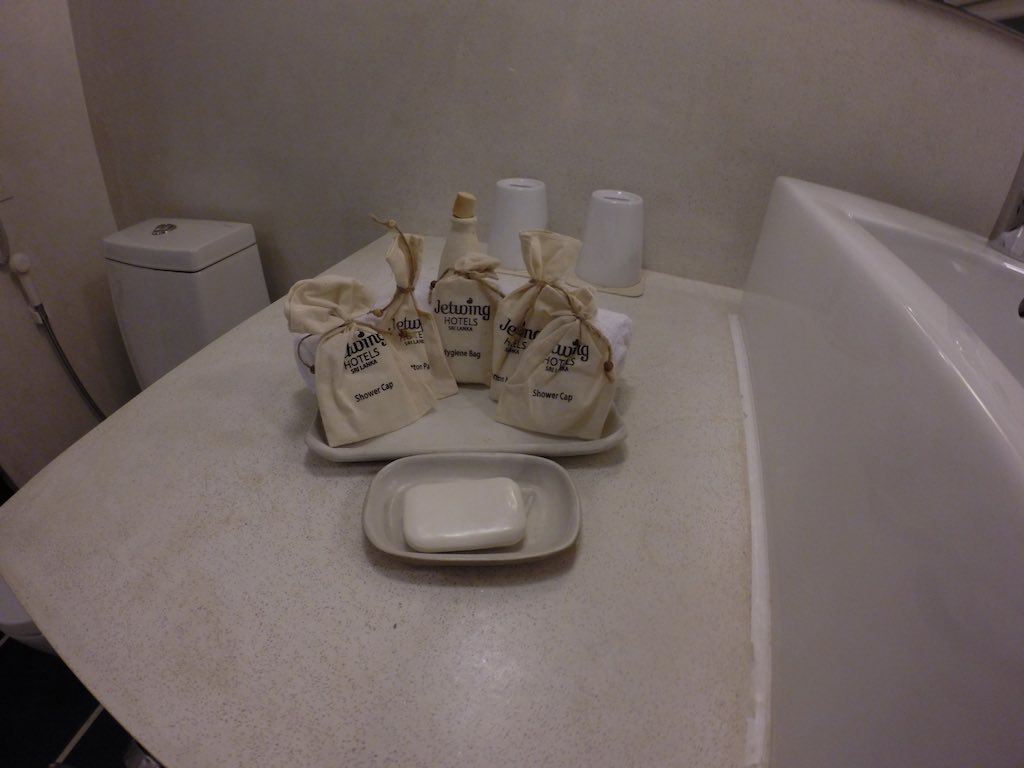 There is no shuttle bus at this hotel location. You will need to take a taxi or tuk tuk to/from the airport. These are easily hailed outside the hotel or by asking the front desk for assistance.

There was a complimentary breakfast included with my deal. Breakfast may vary, but it looks like most hotels in Sri Lanka will provide breakfast. It’s a pretty big meal for them is the reason I think, so eat heartily.

I chatted with the chefs for a bit before sitting down as I was fascinated with the different fruits. A lot of them are similar to the ones with which I grew up in Jamaica. They had mango so of course I had to have some of that accompanied with some Sri Lankan tea, juice and some heavy foods. Off to the right was my view of the beach. It was not a sunny day, but it was still a great view. 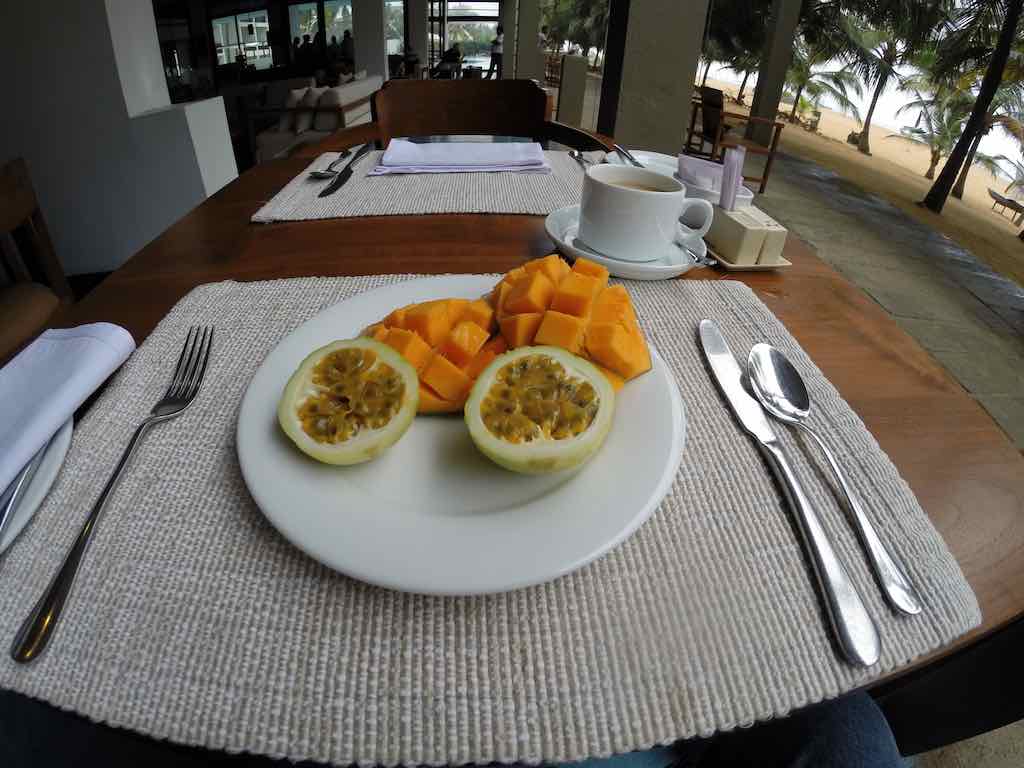 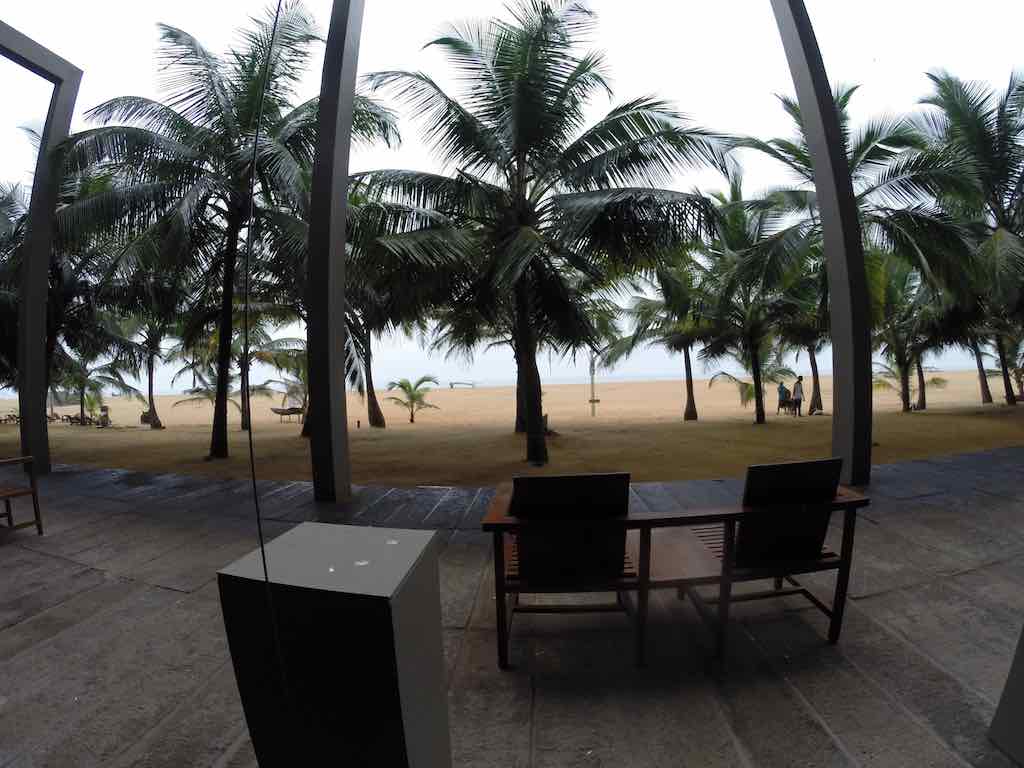 One of the main reasons why I stayed here is its airport proximity. I did not want to get up too early and had I stayed in the city of Colombo, I would have to get up way too early. Check out was a breeze despite that fact that it was perhaps almost 3a when I left. My flight was really early.

Loved it! It’s in a quiet neighborhood where you can walk along the main road. Plus the beach is lovely and quiet except for the ocean’s roar which is fine. The staff were very attentive and its close to the airport so that makes it easy if you just have a layover and don’t want to make it into Colombo.

have you stayed at this or any of the Jetwing properties? What do you think? Please leave a comment below.