17 Things To Do In Houston, TX USA, The Bayou City 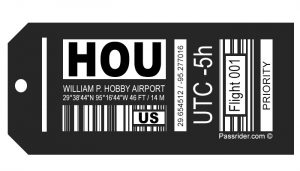 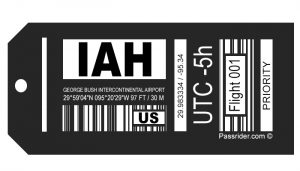 Houston, Texas USA, the 4th largest city in the U.S., population about 7.5M and rising, is one of those cities that if you ask people what is there to do, they pause a bit before they answer, then they can’t really think of anything. But that’s really far from the truth as there are many things to do in Houston, TX. Just so you know, when you visit you will get a taste of Texas and you’ll hear people talk about the Bayou city; that’s ’cause there is a Bayou (river) running through the city. This river actually helps to drain the city when it rains, well most of the times anyways.

I’ve been digging around my adopted city and airports since December 1996 and I’ve found seven things you can enjoy in the city for free. But before I begin, here’s some very important items you need to know before you delve further:

From time to time I’ll do Facebook Live Videos, stop by http://www.facebook.com/passrider to check them out.

How To Get To Houston

Houston is located in the southern middle part of the United States. As United Airlines has a hub in Houston, it is very easily accessible by air as well as buses, but not so much by train. Let’s take a look.

If looking for a low fare, book at the Web sites for the low cost carriers as you’ll more than likely get the best value there.

How To Get From the Airports To The City

The best way to get around Houston is by taking the local bus. My friends do think I’m crazy when I say this, but I’ve not had a car in Houston since 2005. If you do need one, then you can certainly rent one as all major car rental companies are represented. I must warn you though that Houston is one of the more expensive car rental markets. To take the local bus, you should acquire a Metro Q card. Sadly, this cannot be purchased at the airport nor on the airport buses. Instead, you must first pay $1.25 in exact change (a paper dollar is acceptable), then once you make it downtown you can purchase a Q card at the Metro office at Main and Jefferson Streets. The Q card allows you to transfer for free to buses within a two hour timeframe.

English. Due to its proximity to Mexico, Spanish is widely spoken.

You may qualify to use ESTA, if not,  use this link to check U.S. visa requirements. 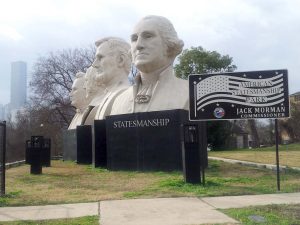 Or as I call it, the Presidents Heads. This piece of artwork is found in one of the six Wards, the Sixth Ward, of Houston. The Wards are/were the low income areas of Houston primarily in the downtown area. I don’t think this was the initial intent, it may have just happened. In some area, land developers have bought them up and relocated the people and built new expensive townhomes; the process continues. Visible form I-45 and I-10 highways you can see the huge sculptures of four statesmen (Stephen F. Austin, Sam Houston, Abraham Lincoln and George Washington). The statues are 18 foot tall and made of white concrete. A pretty impressive sight. 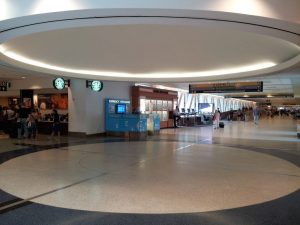 2. Echo Chambers at the Houston-Intercontinental Airport

This one is not downtown, but its worth mentioning. When you are at the airport in Terminal C. There are two places where four walkways cross. I guess the architects thought it would be fun if they created an echo chamber. So if you stop in the dead center and speak it echoes and scares everyone around you. Its a lot of fun so try it when you are passing through the airport. They are located near C14 and C45. If you don’t know they are there, you will walk right past them.

To help visitors get around the city form their hotels, the city operates a complimentary bus. Typically, it goes from the hotels to the Convention Center (Minute Maid Park (baseball stadium) and Toyota Center (basketball)) are close by; Houston is a mega convention city and has many conventions year round. If you have 30 minutes, get on at one of the designated stops to get out of the heat in the summer time and the cold at winter. Both locals and tourist take the bus. You can get on and off at any of the stops, check out that are and then get on again. Check the schedules.

4. Gerald D. Hines Waterwall Park In The Middle of The City

If you journey a little bit to the Galleria area and locate the Williams Tower; don’t worry its the tallest building in the area with a rotating beacon so you can’t miss it, you will find a park with a huge waterfall. It’s mesmerizing that such a monument sits in the city, just constantly gushing water. And yes, when you get too close you will get sprayed. If you put the address in the Google Maps, it will tell you how to get there using public transit. But basically, just take the 81/82 from downtown Houston, get off at the Galleria Mall and walk down Post Oak Boulevard until you get to it. Just walk past the Williams Tower. 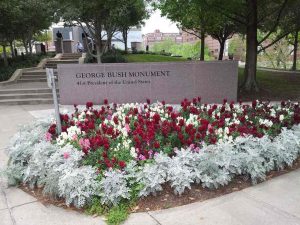 I was walking around the city one day and I just happened upon this monument. As you may or may not know, President George Bush, the 41st President of the Unites States is a Houston resident. In this monument, he is looking toward the city of Houston. You just walk a bit from the curb to the center of the monument to enjoy the view that he sees. Unlike the one at his namesake airport 21 miles away, IAH in Terminal C, just inside security, he has his jacket on. The statue was created by famed portrait artist, Chas Fagan.

This building is a hidden gem in the city. Once you step inside you will see what I mean. Just go one level up and look up. The detail is unbelievable, not mention the pristine surroundings. For a moment, you will forget that you are in a Library. There are also pictures of Houston dating back to 1924. If you look closely, you should recognize that some of the buildings are still standing. 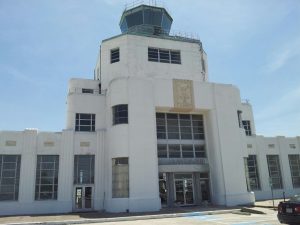 Located at the other side of Hobby Airport, this museum is a must see if you are visiting for more than a day and is an aviation geek.

This is perhaps one of the coolest things I’ve done in Houston. It’s perhaps the shortest vehicular ferry crossing I’ve ever taken. If you take I-10 to the San Jacinto Monument, then you have to take the Lynchburg Ferry in order to cross the Houston Ship Channel. And its free. If its closed, you have to take the long way around.

Houston has many museums to choose from, some make you wonder, Really? There’s a museum for that? Here are a few:

From the top of this monument on a clear day, you can see the downtown Houston, the Houston Ship Channel and of course Battleship Texas. It’s quite spectacular as you can see from the Earthcam installed on the tower – http://www.earthcam.com/usa/texas/laporte/.

Located in downtown Houston, this is the home of the Houston Astros Baseball Team. The entrance actually used to be the main train station in Houston back in the day; Union Station. It’s amazingly grand and worth visiting.

This is an Park that is located in downtown Houston. Many local events are held here.

Where To Eat In Houston, TX

Invariably get hungry when you are here and need something to chew on. It’s said that there are more restaurants per capita in Houston than anywhere else in the U.S. I’m not sure how true that is, but there are a lot of restaurants here. I’ve made a list of a few of the more memorable ones. If you know of any more, please leave a comment below: 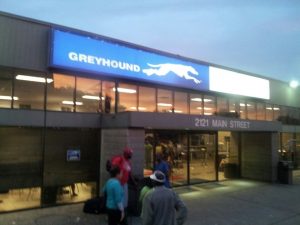 My friends think I’m nuts as no one in their rightful mind uses the Greyhound bus station in Houston unless you really must. But I’ve had occasions to use it when I can’t get to/from other Texas cities by air. The area around the station is one of the not so nice areas of the city, so be careful as lots of people who are not taking a bus or picking up anyone hangs out there. But if you get past that, the burger joint inside makes good burgers. Of course they also claim they are the best burgers in Midtown, but you know what, I enjoyed the burger. Is it the best in Midtown? You tell me.

Yes, they do have hubcaps on the roof of the building. It’s very tiny, but again the food is quite good. Oftentimes, there is no place to sit, so that tells you the food is good; burgers is their specialty.

I don’t know why it’s called “grocery” as this is a burger and breakfast joint and yes the burgers are good; the place is a dive and you’d perhaps not go there unless told the food is good. The food is good.

It’s actually inside an old church. The ambience is good and so is the cajun food.

5. The Teahouse Tapioca and Tea

The Teahouse in Houston, TX is owned by a local and now has upwards of 14 locations in and around the city. If you are a fan of Taiwanese tea then you must stop by. There’s free Wifi and some stores offer a bite to eat.

What have you found on your visit to Houston? Or if you live here, what say you? Please leave a comment below.