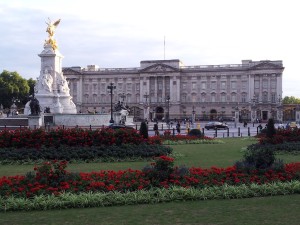 I know that you are always trying to maximize your time off, so I’m always thinking of ways to help you do that. As such, I was recently in London visiting a friend of mine and had the opportunity to try a complimentary one-day London Pass from the folks at The London Pass Office. Many cities have these passes that give discounts on several attractions and ground transportation. So here is what I found with The London Pass.

You do have to pick up your Pass from one of the pickup locations around the city before you set off on your journey. Also, once you use the pass the clock starts on it. Typically the passes are good until the end f the year or up to a year after you’ve purchased then. I picked mine up about two days before I intended to use it so it would not impact my visit times. 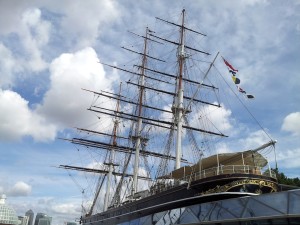 I was staying in the Woolwich (pronounced Woolitch) Arsenal area, so I thought that the best way to do this is to head for Greenwich (pronounced Grenich) and take the ferry into the city since the Pass covers the cost of the City Cruises ferries for the entire day. When I arrived in Greenwich, I thought, there’s the Cutty Sark, I should go see if my Pass worked there. Sadly, it did not so I carried on to the pier for the ferry.

I showed my neck draped Pass to the happy clerk who gave me what’s called a River Red Rover (All Day Unlimited River Travel) pass. I then hurried down to the boat as it was already boarding. After a short delay, waiting for an arriving boat, we departed. The ferry goes along the Thames stopping at Westminster, Waterloo, Tower and Greenwich. You are free to get on/off at any of the stops. The cost for adults is 17 GBP at the pier and 15.30 GBP online. Children get a 50% discount off the adult fare. Try as I may that morning, I was a bit of a delinquent and only got the 11:25a departure. In about 30 minutes, I was pulling into Tower, after taking a leisurely guided tour down the Thames and even seeing the British Airways (BA) Airbus A380 flying overhead. It was great to relax and see parts of London, I have never seen before and would not normally see. I was also amazed by the difference of the high vs low tide as indicated by the water line. 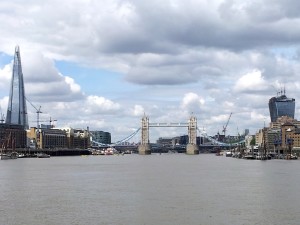 At the Tower stop which is just off to the right as you pass under Tower Bridge, I alighted and headed off. By the way, you can call ahead to have them open the bridge for you and they will at no charge as long as you have a boat tall enough. Apparently, people used to call for the heck of it, so they are a bit stricter now; you need at least 24 hours. Our ferry was not tall enough so the bridge did not open for us; bummer. You may look at the opening times here in case you want to see it opening.

My first attraction stop was the Tower of London. I enquired where I should go to use my Pass and the gentleman dressed in a Beefeater outfit motioned me back to the ticket office (Adults 21.45 GBP and Children 17.55 GBP) just up the hill from the main entrance. There was a long queue, so I figured there must be another way. He was also annoyed when he noticed my Pass adding that it won’t get me into the shorter line. I went around to the other side of the Tower facing the Thames where the Group Entrance sat, showed my Pass and was ushered in after it was scanned. No ticket exchanged hands and I headed in; no line! Take that Beefeater Guy. 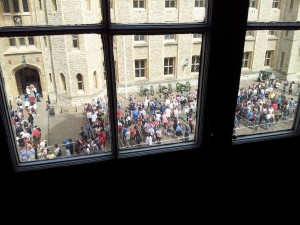 I started my tour of this vast London Attraction and realized that I could really spend all day here and since my Pass was only good for today, I optimized the time spent. I saw a short line into the White Tower and pounced on the opportunity. I looked out the medieval windows and saw the line to the Crown Jewels leading almost down to the Thames; good grief I thought. I made good use of my time in the Tower, noticing that for me, the most interesting thing is its the toilets. You have to visit to see what I mean.

After my tour (once you are in, you are in), I then headed outside to see the Crown Jewels in the Waterloo Block near the Bowyer and Brick Towers. I went up to the entrance looking for a VIP area with my London Pass, but was told by another Beefeater gentleman that my Pass did not give me any additional perks and that I’d have to get to the back of the queue which he said would be a 1-1.5 hour queue. He did however, mention that after 4:00p and early in the morning are best times to arrives as there are virtually no queues at these times. Duly noted, onto the next attraction. 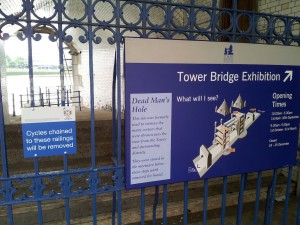 A short walk away is the Tower Bridge Exhibition located of course in Tower Bridge itself. I’d walked and boated past the Bridge all the time, but never had a chance to see the exhibits and today was the day (Adults 8.00 GBP and Children 3.40 GBP). They did have a special London Pass queue, so I used it despite the fact that there was no one in the normal queue; hey, I got the Pass! The lovely lady scanned my Pass and produced an Adult ticket and off I went to the next attendant who gave me an option to take the Lift or walk 120 steps I believe to the top. I chose the latter.

The view from atop the Bridge is actually quite spectacular as well as learning the history although I was never a fan of History in school. I did not spend too much time here except to walk the length of the two pathways across the upper bridge before heading down to the second part of the tour; the motors that used to power the Bridge. For me this was the best part of the tour as its fascinating to see the mechanics of how the Bridge used to be lowered. By the way, it is very intriguing to see how they built this bridge. 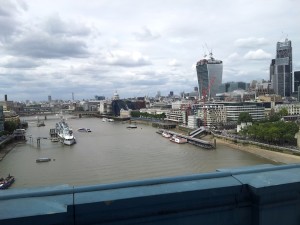 I exited the Exhibit and headed for my next stop on the whistle stop tour, the HMS Belfast; located just a few steps down from Tower Bridge past City Hall. I saw a ticket area and walked right by it down the gangway and boarded the moored ship. Only to find that I needed a ticket (Adults 14.50 GBP and Children under 16 Free) first in order to start my tour. So back I went, stood on a short queue and was given a ticket which I could then use to board as well as pickup a handy headset with recorded guide information.

The HMS Belfast Museum is a part of the Imperial War Museum system. I had actually seen two parts of this already, one part in London  and the other in Duxford where one of the original Concordes is located. I was intrigued by the Belfast and how well they’ve restored it and continues its restoration. You can go in most of the areas which is quite amazing. Learning about its history and where its been is interesting if you like history and are into ships. 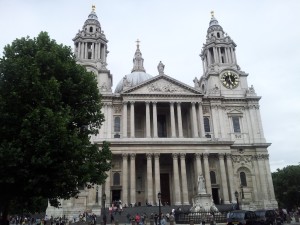 I was pretty tired now, but I had gas enough for at least one more exhibit. This one though was a ways away and I had to take a train and then do some walking. All this before closing at 4p. St. Paul’s Cathedral here I come. I knew this one would be close, but I wanted to push the envelope so I did. I raced to the nearest Tube station; London Bridge and made it to St. Paul’s, just in the nick of time. I had no time to do the catacombs though, so I headed upstairs, showed my Pass and got a ticket (Adults 14.50 GBP and Children 6 GBP) and was warned by the ticket agent that they were closing soon.

Now I could go on and on about St. Paul’s Cathedral, but I’ve gone on for quite a bit in this post. I’ve passed this Church several times, but had no idea about all that it entails until this visit. You can almost go all the way up to the top of the highest steeple. It’s pretty amazing. Of all the sights I saw today, this one took my breath away. The photo opportunities are spectacular as well. Just wear comfortable shoes and bring some water with you as there are several stairs to be climbed. Also, there is quite a bit of queuing as well. 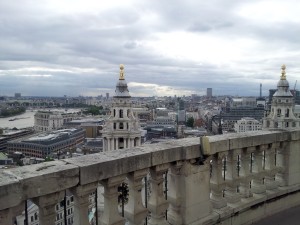 By the time I made it all the way to the top and back down again it was closing time and the evening mass was about to start. I had pounded through four exhibits and I still had a 170+ page London Pass Guide book of exhibits to experience. I had to meet a friend of mine at 5:30p, so I headed to see him. Later I took the Tube home instead of the ferry as it was now too late to still use my River Rover.

So here’s how I did cost-wise. 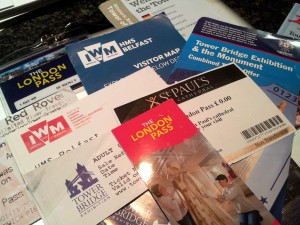 So I would have saved 28.55 GBP since The London Pass cost 47 GBP. I could have also seen one more attraction, Handel House Museum (Adults 6 GBP and Children 2 GBP), had it been a Thursday as it closes at 8p. Also, I had started at 11:25a, if I had woken up earlier, I could have seen Churchill War Rooms (Adults 17 GBP and Children under 16 Free)) as they are open at 9:30a. But I could only do Handel House though as adding the War Rooms would have exceeded my 90 GBP allowance for the day even without trying to do Handel House.

So is the London Pass worth it?

Yes, but I suggest you plan the attractions you would like to see, to ensure you keep within the value of your Pass and stick to the plan as best as possible. Also, when you get to the attractions, immediately ask if there is a special queue or route for London Pass holders. Don’t be obnoxious though :-). And have fun!

Have you ever used The London Pass? What as your experience like? Please leave a comment below.