Fast cars! People, O.K. most people like fast cars. I don’t want to own a fast expensive car, but I love to see them and hear them. It’s why if I’m in Houston on the first Saturday of the month, I try to make it to Houston Coffee and Cars, a display of all kinds of cars, mostly the fancy ones. So of course I was thrilled when The Emilia-Romagna Tourist Board invited me to visit the Motor Valley in Italy.

So off I went, myself and nine other car-loving travel blogging friends to explore the region. Now, it wasn’t all cars though, we ate and drank our way through the Valley too as after all, its is Italy :-).

First, let’s look at how one gets to the region.

How To Get To The Motor Valley

The closest commercial airport is the Bologna Guglielmo Marconi Airport (BLQ). There is no longer any nonstop service from the U.S., (American Airlines stopped in September 2019) so its necessary to fly into one of the hubs of the major European airlines and then fly into Bologna. This is not an issue though as the airport has plenty of air service.

Once in Bologna, you can rent a car and then head to Modena or you can start at the Ducati Factory as its closest to Bologna.

If you like, you can also take the train from Bologna Center to Modena and then work it out from there. They are working on rail service from the airport to the city.

As a matter of fact, the Enzo Ferrari Museum is right next to the Modena train station and you can walk to the Maserati Showroom and Factory Tour. You would need transportation to get to the Lamborghini Museum, the Autodromo and the Ducati Factory Tour.

If you want to look into local buses as there is a very good bus system in Emilia-Romagna. You can use Google Maps to help you plan.

Where To Stay In The Motor Valley

I stayed in Modena while doing the tours as it was easier to do so. We stayed at the Hotel Estense which is just about five to ten minutes from the center of the city and 13 minutes by foot to the train station. It comes with free breakfast. I must say though the rooms are small, but its Europe so it fits right in.

You can find hotels from the widget below:

Now let’s look at some of the tours offered in the Motor Valley.

When I was much younger, younger than 8 or 9, I fell off my uncle’s motorbike. I wasn’t paying attention and when he turned right, I leaned left and fell off. My mother, his sister, was livid! I’ve not gotten on a motorcycle since then.

So when you see people riding motorcycles in foreign countries, that’s won’t be me. Maybe that will change at some time, who knows, well actually, it did as I mounted a Ducati motorcycle at the end of the Ducati Factory Tour. I wasn’t moving of course :-). But it was fun. 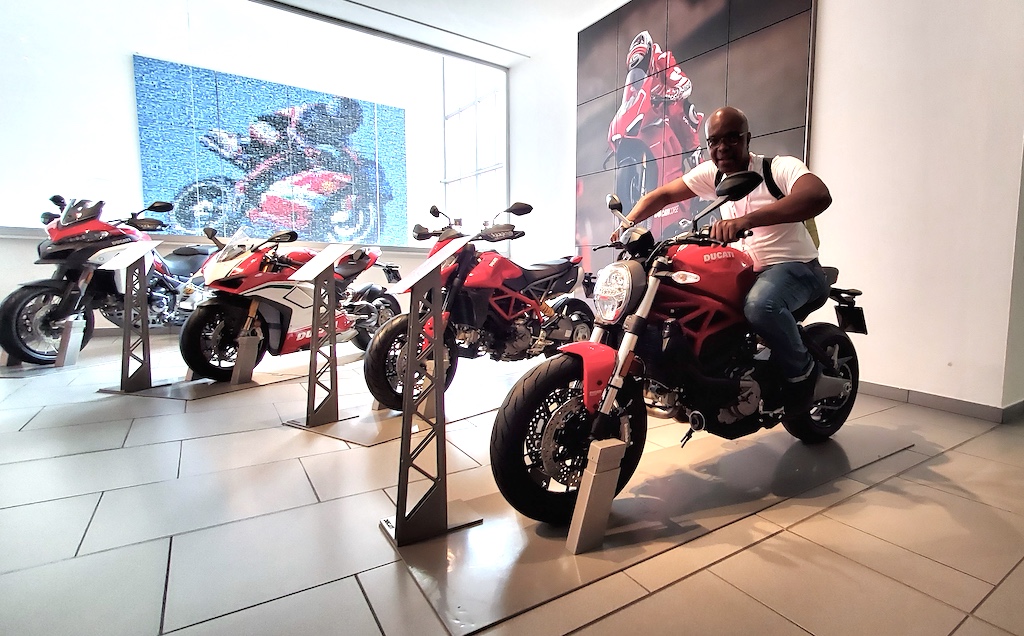 During the factory tour, you are not allowed to use your phones. You can lock them up in free lockers or they put little stickers over the cameras.

It’s pretty amazing you get to see the assembly process from start to finish. And its kinda of cool that the employees are all dressed in red Ducati t-shirts and black pants. 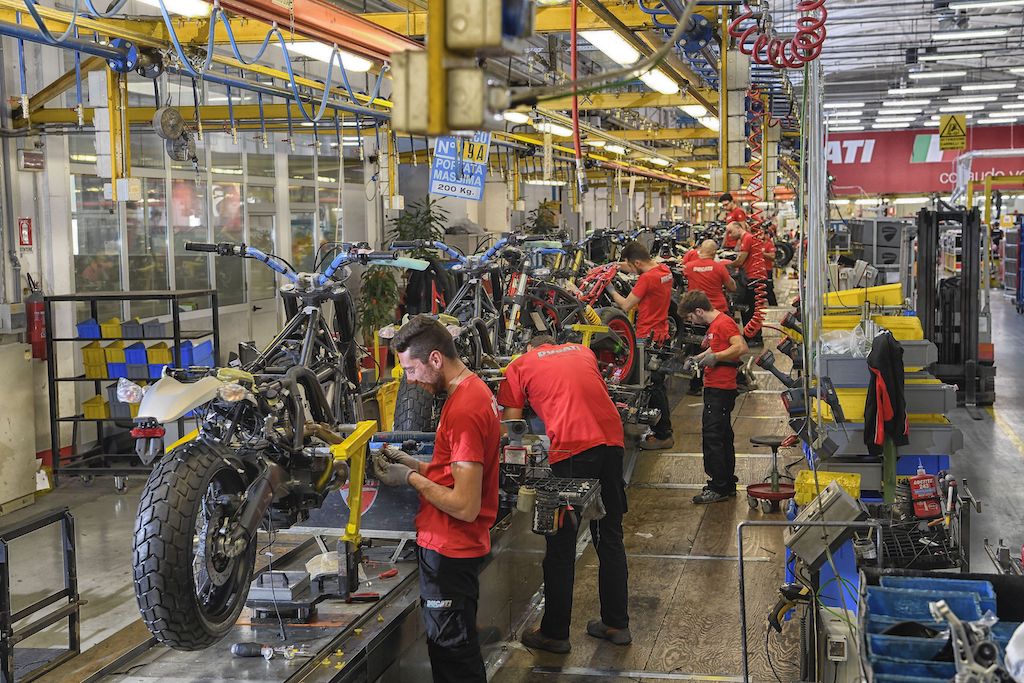 A lot goes into the production and you can see the safety systems in place too. It was fun seeing them start a motorbike for the first time as well and test it right before our very eyes. 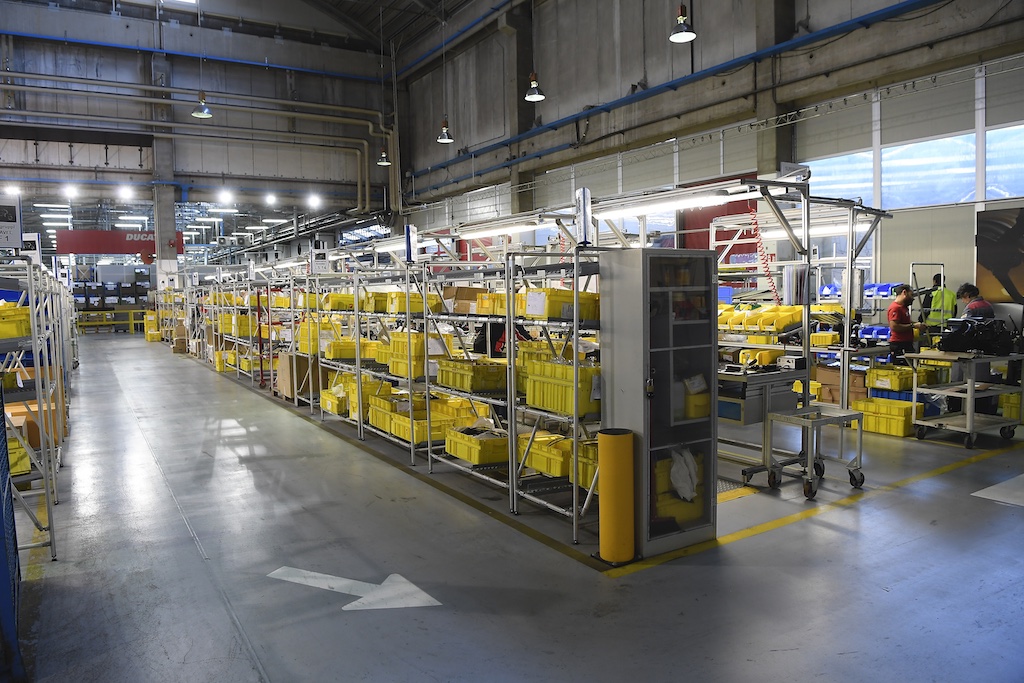 The Museum does a good job of showing you the history of the bikes. It’s amazing to see the early bikes; quite different than the ones we have today.

Ducati Museum and Factory Tour – Bikes Over The Years

When we got outside, I was keen to notice that only Ducati-branded motorbikes were parked in the factory parking lot and was fortunate to see an employee ride out on a Ducati.

I’ve always been a fan of Lamborghinis. At the airport in Bologna, thee were two of the newest Lambos parked in a showroom on airport property. I of course spent some time looking at them and taking a few photos. I was marveling at the fact that one of them is a SUV. Later I’d find out the story behind both cars.

Lamborghini Huracan and Uhurus at the BLQ Airport

Lamborghinis are fast, sleek and did I mention fast? So when we pulled into the parking lot of the Factory and Museum, of course I was psyched!

You sign a waiver, as is typical and then you strap into the full motion simulator with three huge screens. You’re given some instructions on how it all works and off you go.

It’s pretty amazing as you feel the full force of the car and you are shown where to start braking by red lines on the screen. Despite that I crashed, well, skidded off the track, but was able to get back on and continue.

It’s really hard to stay on the track in the turns. As soon as you got used to it though, it was over. It’s so worth it!

Our cameras were all confiscated, O.K., that’s a harsh word, we were asked to put them in a locker, given headsets and off we went.

Behind a secret door stood greatness. The place is spotless, absolutely spotless!

We were treated to the assembly of the Lamborghini Huracan where the workers are all dressed alike and work to precision.

The body shell comes from underground and then 35 minutes later, the car is started and driven to another position for more checks and modifications.

Each car is unique and you can order the colors, the interior colors, etc. We were treated to all that plus, we also saw the Aventador being done which takes a little longer to assemble about 99 minutes.

It’s all hand done except for one robot that helps with engine installation. It was really great to see the operation.

The museum shows the history of Lamborghini with a number of models from the first to the latest. You can freely walk through this area, just no sitting in and touching the cars. Quite different from Maserati where you can get into the cars and touch all you want.

This is the second coolest thing I’ve done in auto racing in my travels. The first was at the Watkins Glen track near Corning, NY about a year ago, where I driven around the track in a race car.

At Autodromo Modena, you can drive your own car, drive a Ferrari 458 or be driven in a Ferrari 458 by a professional driver. Take your pick. I was driven as there are a lot of insurance stuff and you also have to ensure your driver’s license is valid in Italy.

We had a chance to take lots of photos of the cars, signed waivers, then we had a briefing, took more photos, got suited up, helmet and balaclava, then had two laps around the track, then took many more photos and when everyone was done, we got a certificate.

The G forces are insane. The day before, we had driven the Lamborghini full motion simulator at the Lambo Museum and Factory Tour, but that did not really prepare us, well kind of.

When my driver hit the brakes, he really hit the brakes and the car slowed quickly, but then he had to turn quickly too, so I spent many times pressed into my seat or the side of the car. It was so much fun!

I highly recommend this experience.

This experience takes you to where it all started in Modena. You see the engines, the cars and lots of history, even his original office.

Across the way is the huge museum, showroom and gift shop. There is a video that plays throughout the day which is worth seeing as it showcases the history with music and film. I loved this area as I did not realize Ferrari made so many cars that I’ve seen in movies. Impressive.

Here too is a Ferrari simulator; as we did not have enough time, we did not get to experience it. You can find details here. Actually you get a discount with your museum ticket if you’d like to drive your own car at the Aerodromo Modena.

Note that the factory tours are not done at this location.

This was not on our agenda, so we did not get a factory tour as it has to be arranged before hand. As it was an easy walk from the city center, we legged it over there to check it out. It’s right on the edge of town.

However, we did get to visit the showroom floor. The Guide was very knowledgeable and gave us a ton of information on the history of Maserati.

The cool thing is that after we were done, we had an opportunity to sit in the cars and touch them :-). We were not able to do that any the other places we visited, except Ducati as they had four motorcycles on which you can sit and take photos.

We visited the Hombre Farms and were treated to how cheese is made and also looking at the cows. But the real gem of this farm is the private Panini Motor Museum which is a tribute to Maserati owned and founded by Umberto Panini.

As you walk into this room, all you can see are Maseratis; it’s like each time they built one, the family bought one :-).

There are also bicycles, bikes and many other different types of cars as well. Everything is well maintained too.

Outside, there is a collection of tractors the pride of which is the Lamborghini tractor; who knew they made one.

I was also able to see a Ford F350 in the garage being worked on.

Yeah, I highly recommend a stop here too, if not for the cars, for the Parmigiano Reggiano!

Speaking of cheese, let me share some places to eat before we finish.

It’s Italy, so there is no shortage of places to eat. We were treated to two uniquely amazing places though. One is in the heart of the city of Modena, Pomposa al Regras, and the other, Acetaia Pedroni – Osteria di Rubbiara, is about 20 to 30 minutes outside the city. Let’s take a look.

We also had lunch at Upper in the market which is near the center of the city and ice cream at Bloom Gelato.

Modena, Italy in Emilia-Romagna Upper in the Market

Gelato from Bloom in Modena, Italy in Emilia-Romagna

Have you been to this region? What are your thoughts?