Flight Cancellations Due To Hurricane Iain

I had a ticket to Miami, FL (MIA) on Wednesday, September 28, 2022, then Hurricane Ian arrived. Here’s what happened:

I got an email from American Airlines on September 25, 2022, telling me I could change my ticket without penalty. When I clicked on the link, though, it did allow me to change my ticket, but I would have to pay the difference in fare. Knowing that the Hurricane was heading to Florida, but not to Miami as the weather models predicted, I wanted to get to Miami as soon as possible that day (Wednesday).

So, I tried to change to the 5:30a nonstop flight instead of my 6:46a connection over Chicago. But the charge was $125 (the difference in fare). Kind of silly, I thought, as I don’t think I had a change fee for my flight, so what was the point?

I kept trying over the next few days; the flight was on the 28, and the cruise was on the 29th, but the results were still the same. I have to pay $125.

On the 27th, in the evening, I got a message from AA that said that the Chicago to Miami connection was canceled, and I got rebooked on the evening nonstop flight to Miami. I spent the next few hours waiting on the phone to ring for a callback. In the meantime, I tried using the App and Twitter to contact them about other flights.

As it turns out, they had canceled the two other nonstop flights to Miami from Houston that day and many other flights into Miami, so there were no connecting opportunities. I had terrible handling from the folks who managed the chat on the App; however, the Twitter folks were spot on and provided the most help.

I found a flight on United at 10:29a and bought it for just under twice what I paid for the AA ticket; $260. But it departed earlier, so I felt better about it.

I checked-in for that one, got partially packed, and went to bed.

I got up early on Wednesday morning, about 6a, checked my emails, and sure enough, the flight was canceled, and I was moved to the 6:35p flight. Grrr. Precisely what I was trying to avoid happened.

I then went back to bed and woke up at 8a.

I figured I’d take the new United flight and monitor the American flight to see which would cancel and take the one not canceled. At worst, I could still cancel either and get a refund.

The policy for both tickets is that you are entitled to a refund if the flight is canceled. And the United ticket was offering me a cancel refund as the ticket was booked within 24 hours. Also, they had canceled the original flight, so I also had that as a reason.

I made it to the airport, got checked in, and hung out in the United Club as I do have a United Club card.

I kept checking the incoming flights for both flights, and they were all good to go. I decided to keep the United flight as I had already checked in and was in the United Club and the inbound flight was on its way.

With about 2.5 hours to go, I went to the American Express Centurion Club to get dinner since the United Club just had snacks.

Once finished, I headed back to the C40s gate for my flight. I’m getting credit on my ANA account and asked the agent if there was a possibility for a better seat as I had a regular Economy seat. He said, but only if I wanted to pay a minimum of $70. I thanked him and said no thanks.

I kept checking the American Airlines flight, which had sent me a notice that they were oversold and offering up to $350 to go on another flight.

In the end, the United flight left with open seats, albeit a bit late. I wonder how the American flight did.

It was interesting how it all changed so much during the last few days of the flight, just from the approaching Hurricane.

In Miami, the departure departure boards had many flight cancellations. 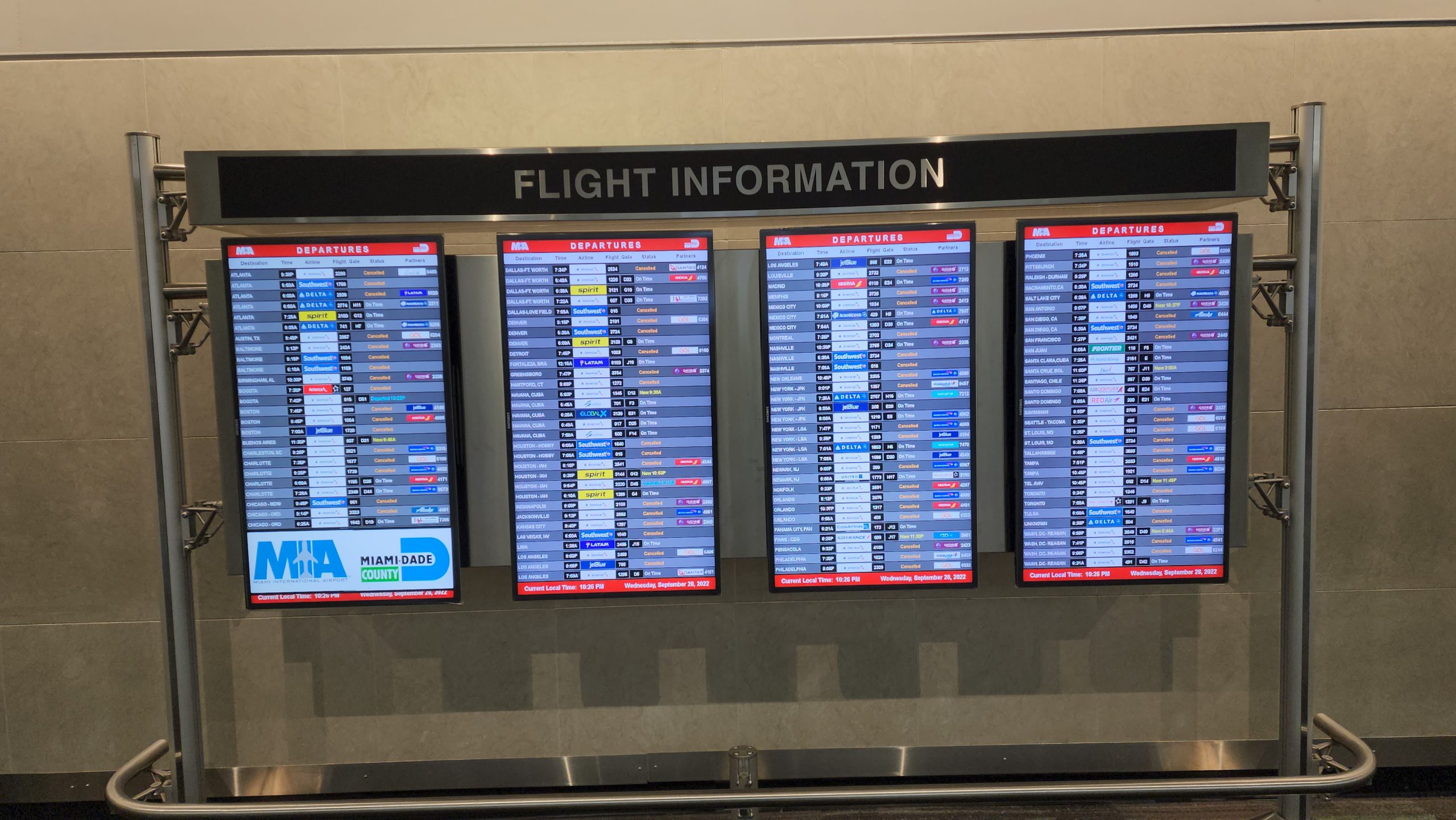 Once safely in Miami and at my hotel, I applied for a refund on AA’s website, and it should arrive in my account within seven days after a manual review.

What have you found when you traveled on a flight that was canceled? Leave a comment below.